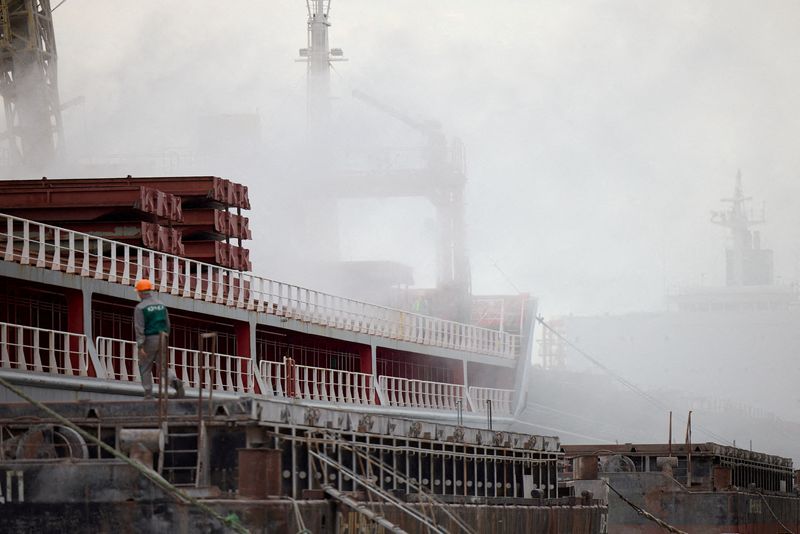 © Reuters. FILE PHOTO: A view shows a ship in a sea port in Chornomorsk before the restarting of grain export, amid Russia’s attack on Ukraine, in Chornomorsk, Ukraine July 29, 2022. Ukrainian Presidential Press Service/Handout via REUTERS/File Photo

UNITED NATIONS (Reuters) – U.N. Secretary-General Antonio Guterres and his team are working to expand and extend for a year a U.N.-brokered deal allowing Ukrainian Black Sea grain exports, which could expire in late November.

“We’re trying to remove the uncertainty to ensure that people are publicly saying that ‘yes, this will be extended a further year,’ but we’re not there yet,” said U.N. spokesman Stephane Dujarric, adding that U.N. officials are also working to facilitate Russian grain and fertilizer exports.

U.N. aid chief Martin Griffiths and senior U.N. trade official Rebeca Grynspan are set to travel to Moscow in about a week to discuss both issues with senior Russian officials, Dujarric told reporters.

“The Secretary General and his team are engaged in intense contacts on these issues. Mr. Guterres and the team are working hard on having an expanded and extended Black Sea Grain Initiative,” he said. “They’re working actively to remove also the last obstacles to facilitate the export of Russian grain and fertilizer.”

Russia has criticized the deal, complaining that its exports were still hindered. Moscow could object to extending the pact allowing Ukraine’s exports beyond late November.

The deal included ammonia – a key ingredient in nitrate fertilizer. A pipeline transporting ammonia from Russia’s Volga region to Ukraine’s Black Sea port of Pivdennyi (Yuzhny) was shut down when Russia invaded Ukraine on Feb. 24.

The United Nations is now trying to broker a resumption of those ammonia exports.

Ukraine and Russia are both key global grain and fertilizer exporters. The United Nations said the agreement on Russian and Ukrainian exports is needed to tackle a global food crisis that it said had been worsened by Russia’s war in Ukraine, pushing some 47 million people into “acute hunger”.

US issues sweeping restrictions on chip sales to China

Escalation of violence in Ukraine disrupts aid work By Reuters