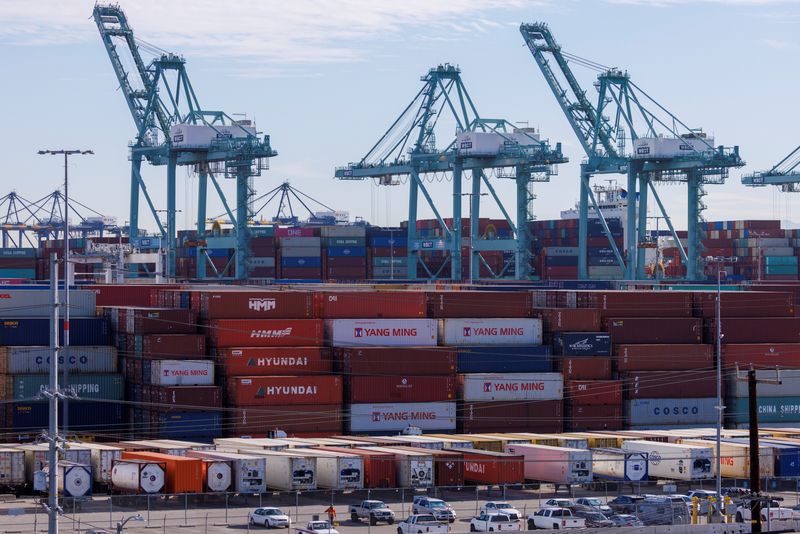 LOS ANGELES (Reuters) – After more than two years of surging demand, the volume of container imports coming through U.S. ports has tumbled sharply, raising questions about where a sector once tracked as a supply-chain stress point will hit bottom.

Container import volumes across all U.S. ports hit an all-time high in May and pulled back slightly before plunging in August and September. That put the indicator close to the levels last seen in 2019, before the pandemic and a surge in demand for shipments of furniture, clothing and appliances, according to data tracked by Descartes (NASDAQ:) Datamyne.

The question is whether the trendline – an indicator for strength of consumption, the wider economy and trade – flattens out in the coming months, relieving a source of supply-chain distress that had driven prices higher, or whether the boom turns to an outright bust with a potential recession looming, analysts told Reuters.

Goods packed in ocean containers account for roughly 25% of U.S. imports and many of the purchases made by consumers, whose spending fuels as much as 70% of U.S. economic activity. Volume surged as much as 40% from 2019 levels during the pandemic as retailers raced to meet soaring demand for goods.

That surprise surge clogged ports and spawned cascading delays, leading to delayed deliveries of everything from pharmacy supplies to Peloton (NASDAQ:) exercise bikes. As recently as March, the Biden administration supply chain task force had tracked container imports as part of a “dashboard” to monitor the distress in the distribution of goods and a contributor to higher prices.

“We’re going back to 2019,” said transportation economist Walter Kemmsies, who believes consumers are reverting to their historical spending split of 70% on services and 30% on goods.

Spending on services, which had risen during every U.S. recession since 1973, broke that pattern when the U.S. economy slipped into recession in early 2020 with the onset of the COVID-19 pandemic. The resulting drop in spending on that category – at one point as steep as 14% – freed up dollars for goods purchases.

Kemmsies said the August and September pullbacks in the volume of container imports is the result of retailers like Walmart (NYSE:) and Amazon.com (NASDAQ:) cancelling billions of dollars of orders earlier this year. They made that call after shoppers stopped bingeing on sweatpants, sofas, remote school laptops and big-screen televisions, and shifted to spending on concert tickets, travel, in-restaurant dining and other services.

U.S. retailers are now swimming in excess apparel, personal computers, small appliances and holiday decor and racing to clear bulging product supplies. And they are likely to hold back on new orders until that profit-sapping overhang is eliminated.

S&P Global (NYSE:) on Tuesday forecast that worldwide trade would contract slightly in 2022 and 2023 before recovering in 2024.

“Warehouses are full. Until importers clear their inventory, expect overseas orders to be weak,” shipping consultant Jon Monroe said in a weekly update.

Bank of America (NYSE:) analysts struck a similar note on Tuesday. “We are skeptical of a major restock coming anytime soon,” they said.