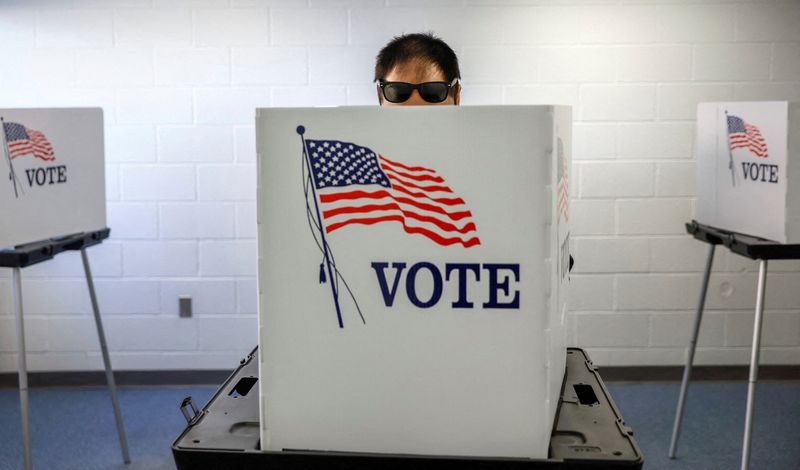 © Reuters. FILE PHOTO: A voter marks his ballot during early voting at the Lansing City Clerk’s Office ahead of the midterm election in Lansing, Michigan, U.S., November 7, 2022. REUTERS/Evelyn Hockstein

WASHINGTON/SAN FRANCISCO (Reuters) -A senior U.S. cybersecurity official said there is “no specific or credible threat” to disrupt election infrastructure during the U.S. midterm elections on Tuesday.

The official was speaking to journalists during a scheduled briefing just as Election Day was beginning.

Election security has emerged as a key issue in the United States after officials found Russia interfered in the 2016 U.S. presidential election with a campaign of hacking and propaganda intended to hurt Hillary Clinton’s chances of winning against Donald Trump.

The Cybersecurity and Infrastructure Security Agency (CISA) plans to set up an Elections Day Operations Center with public- and private-sector partners across the country to monitor the midterms, it said in a statement on Monday.

“In recent years, election officials have had to contend with increasing disinformation from foreign adversaries, which can cause confusion about election infrastructure and undermine voters’ faith in the process,” Kim Wyman, the security agency’s senior election security advisor, said in a statement last week.

“Now, when something goes wrong – and with 8,800 election jurisdictions across the country, something will go wrong somewhere – the innocuous can be made to look nefarious.”

The creators of Pokémon Unite are bringing Monster Hunter to mobile

Amazon workers protest at some German, French sites on Black Friday By Reuters