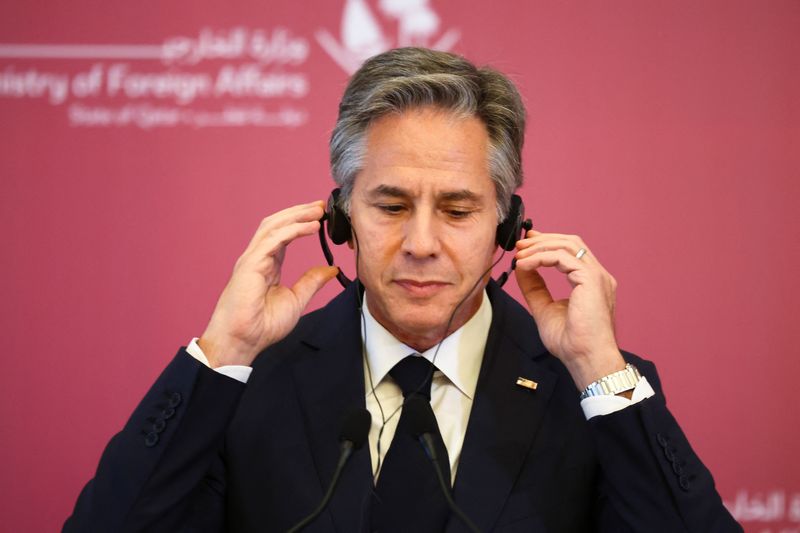 DOHA (Reuters) -The U.S. relationship with Saudi Arabia is still under review despite a Biden administration ruling that the Saudi crown prince has immunity from a lawsuit over the murder of Jamal Khashoggi, Secretary of State Antony Blinken said on Tuesday.

Khashoggi, a Saudi journalist then living in the United States, was killed and dismembered in 2018 by Saudi agents in the kingdom’s consulate in Istanbul, in an operation U.S. intelligence believes was ordered by Crown Prince Mohammed bin Salman.

The prince has denied ordering the killing, which has cast a pall over relations between the two countries.

Khashoggi’s fiancee has sued the prince in U.S. court, but in a ruling last week, U.S. Justice Department lawyers concluded that the prince had immunity as a result of having been named prime minister in the Saudi government in September.

“The opinion that we provided does not in any way speak to the merits of the case or the status of the bilateral relationship,” Blinken said.

“Our review of that relationship is ongoing,” he told reporters at a news conference in Qatar after an annual U.S.-Qatar strategic dialogue. Blinken also said there were no plans for the prince to visit the United States.

The Biden administration’s ruling last week came at a time of increased strains between Washington and Riyadh over energy supplies, after the OPEC+ oil group decided at its last meeting to cut output targets over U.S. objections.

Blinken said the legal opinion that the prince was entitled to immunity was based on “long-standing practice” observed in “hundreds of cases”.

“In every case, we simply follow the law. And that’s what we did,” he added.

The decision has drawn criticism from the slain journalist’s fiancee Hatice Cengiz, who had filed the lawsuit jointly with a human rights group founded by Khashoggi.