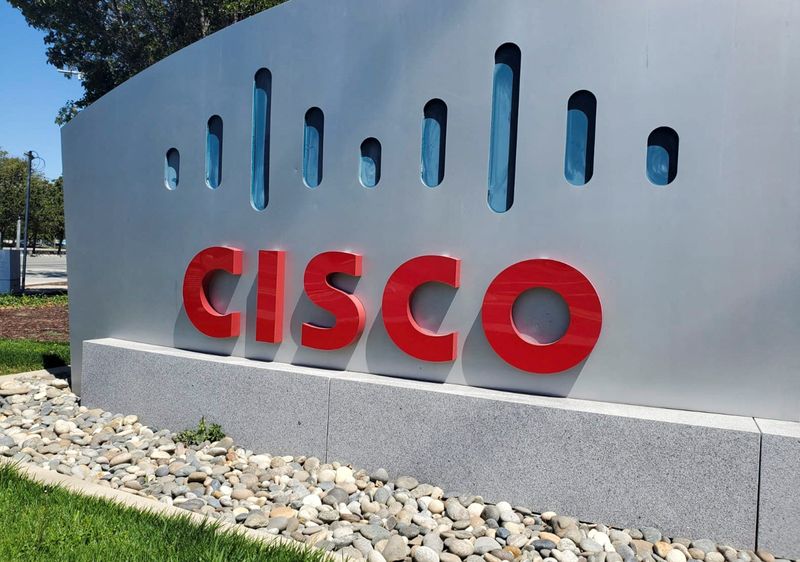 © Reuters. FILE PHOTO: A sign bearing the logo for communications and security tech giant Cisco Systems Inc is seen outside one of its offices in San Jose, California, U.S. August 11, 2022. REUTERS/Paresh Dave/File Photo

WASHINGTON (Reuters) -The U.S. Supreme Court on Monday declined to hear a bid by Centripetal Networks Inc to reinstate the largest award in the history of U.S. patent law – $2.75 billion – to be paid by Cisco Systems Inc (NASDAQ:) in a cybersecurity patent dispute.

The justices turned away Reston, Virginia-based cybersecurity company Centripetal’s appeal of a lower court’s decision to negate the award after the judge who presided over the trial disclosed that his wife owned Cisco stock worth $4,688.

Judicial conflicts of interest have attracted heightened attention since the Wall Street Journal last year reported that dozens of federal judges had violated federal law by hearing lawsuits involving companies in which they or their families owned stock.

Centripetal sued Cisco in federal court in Virginia in 2018, accusing it of infringing patents related to Centripetal’s network-security technology.

U.S. District Judge Henry Morgan, who died in May of this year, ruled in 2020 after a non-jury trial that San Jose, California-based tech company Cisco had infringed the patents. The judge awarded Centripetal $1.9 billion in damages plus royalties that Cisco said increased the total to more than $2.7 billion.

Morgan told the companies before issuing his ruling that his wife owned 100 shares of Cisco stock, though he was unaware of it during the trial. Morgan said it had not influenced his handling of the case and he already had written most of the ruling and decided “virtually every issue” before learning of her stock. The judge placed the shares in a blind trust.

The U.S. Court of Appeals for the Federal Circuit, which specializes in patent issues, threw out the award in June and sent the dispute back to a new judge in Virginia. The Federal Circuit found that Morgan either should have recused himself from the case or made sure the stock was sold.

The Federal Circuit said letting the judge’s decision in the case stand would undermine the public’s confidence in the judicial process. It also found it irrelevant that Morgan ruled against his wife’s financial interests.

Centripetal told the Supreme Court that Morgan had complied with the law, and that selling the shares just before ruling for Cisco would “solve one appearance-of-impropriety problem by creating another.”

Denmark stocks higher at close of trade; OMX Copenhagen 20 up 1.40% By Investing.com

Rockets land in Baghdad’s Green Zone after day of clashes