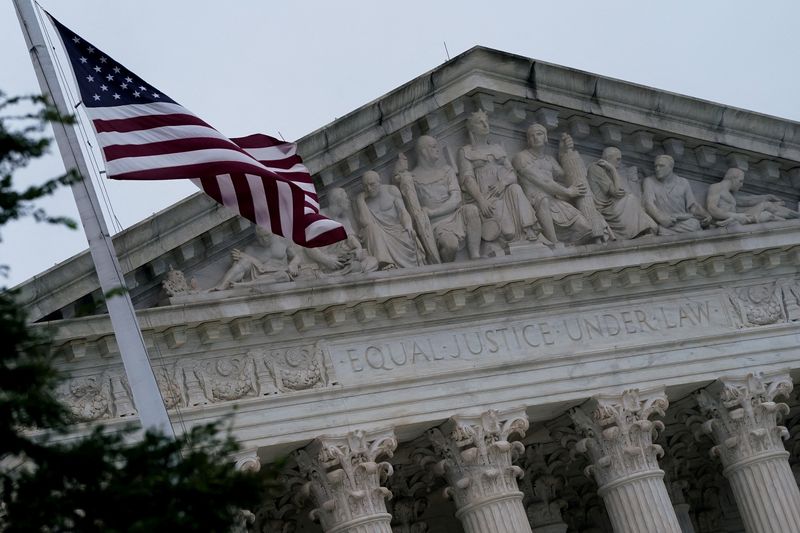 WASHINGTON (Reuters) – The U.S. Supreme Court on Tuesday turned away a bid by gay-marriage opponents to block the public release of video of a watershed 2010 trial in California that overturned a voter-approved ban on gay nuptials in America’s most populous state.

The justices declined to hear the appeal of a lower court’s 2021 ruling in favor of news media companies including public radio and TV broadcaster KQED and advocates of gay marriage who sought release of video of the proceedings made for the trial judge. Proponents of the 2008 ballot initiative, called Proposition 8, had argued the video should remain sealed based on the trial judge’s pledge at the time to keep it private.

The two-week trial at issue in federal court in San Francisco, presided over by U.S. District Judge Vaughn Walker, involved a lawsuit brought by two gay couples who challenged Proposition 8 to ban same-sex marriage in California, which passed with the support of 52% of voters.

Walker ruled in 2010 that the state’s bar on same-sex marriage violated the U.S. Constitution’s guarantees of due process and equal protection under the law.

The Supreme Court in 2013 let Walker’s ruling stand, paving a way for same-sex couples to marry in California. The Supreme Court in June 2015 in a landmark ruling of its own legalized gay marriage nationwide, ruling along the same constitutional grounds as Walker.

Walker recorded the 2010 trial for what he said would be a tool to help him write his ruling, stating that “it’s not going to be for purposes of public broadcasting or televising.” The recording has remained sealed since then though a written transcript of the trial long has been available.

The Supreme Court in 2010 rejected a bid to allow the trial to be publicly broadcast, finding that such a step was not allowed under the San Francisco federal court’s rules.

San Francisco-based KQED in 2017 asked a federal court to “unseal the tapes and permit them to be viewed by everyone.” It said in a legal filing that the tapes are of interest to “court-watchers, law students, scholars, historians, activists, concerned citizens and those interested in the transparent operation of the judicial branch.”

A three-judge panel of the San Francisco-based 9th U.S. Circuit Court of Appeals ruled in 2021 that the video recording of the trial could be released. Writing for the majority, Circuit Judge William Fletcher said Proposition 8 supporters had failed to show how they would be harmed by its disclosure.

In dissent, Circuit Judge Sandra Ikuta called the court’s order “another sad chapter in the story of how the judiciary has been willing to bend or break its own rules.”

Charles Cooper, the conservative lawyer who pressed the effort to keep the video sealed, told the Supreme Court in seeking review of the 9th Circuit ruling that “the root question in this case is whether a federal judge’s binding promise, made to litigants in open court and on the record, is worthy of trust.”

Cooper said two lower courts “both ultimately said the answer to that question is no, threatening grave and irreversible harm to the basic integrity of the federal judiciary.”