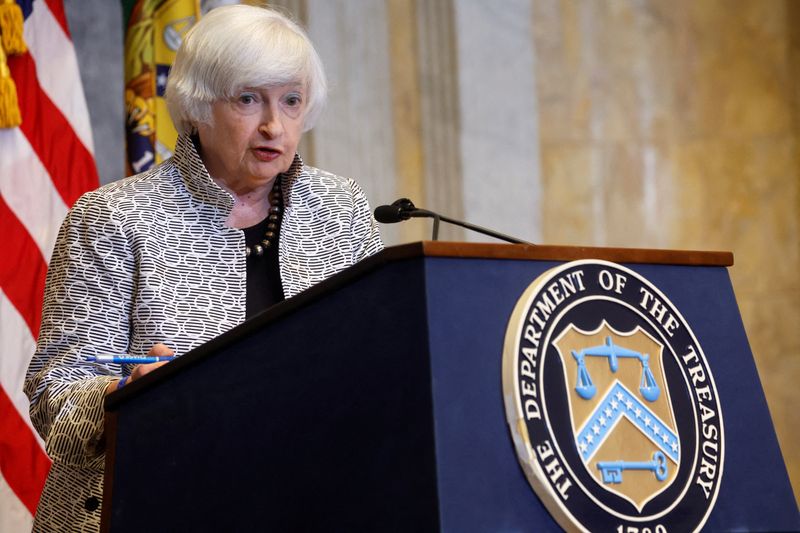 WASHINGTON (Reuters) -U.S. Treasury Secretary Janet Yellen on Friday underscored the need for a broad coalition of partners to help Ukraine recover and rebuild after Russia’s invasion, with a focus on near-term, high-impact projects, the Treasury Department said.

During a virtual meeting with Ukrainian Prime Minister Denys Shmyhal, Yellen also discussed the need for Ukraine’s partners to deliver expeditiously on economic assistance for the country, which has been besieged for over six months by Russian forces.

Ukraine, which faces $635 million in principal payments on prior IMF loans beginning next week, hopes to get details soon on the format of fresh support from the global lender, a senior central bank official said Thursday.

The United States is providing grants to Ukraine that will add up to $8.5 billion by end-September, the Treasury said. The Biden administration is also requesting an additional $4.5 billion from Congress to help the country cover its critical needs in the coming months.

Yellen’s meeting with Shmyhal came hours after the first comprehensive assessment of Ukraine’s damages and needs showed it could cost nearly $350 billion to rebuild the country, or about 1.6 times its gross domestic product in 2021.

In her discussion with Shmyhal, Yellen also outlined the next steps for implementation of a Group of Seven price cap on Russian oil meant to put downward pressure on global energy prices and reduce revenues that Russian President Vladimir Putin is using to fund the war, the Treasury said in a statement.