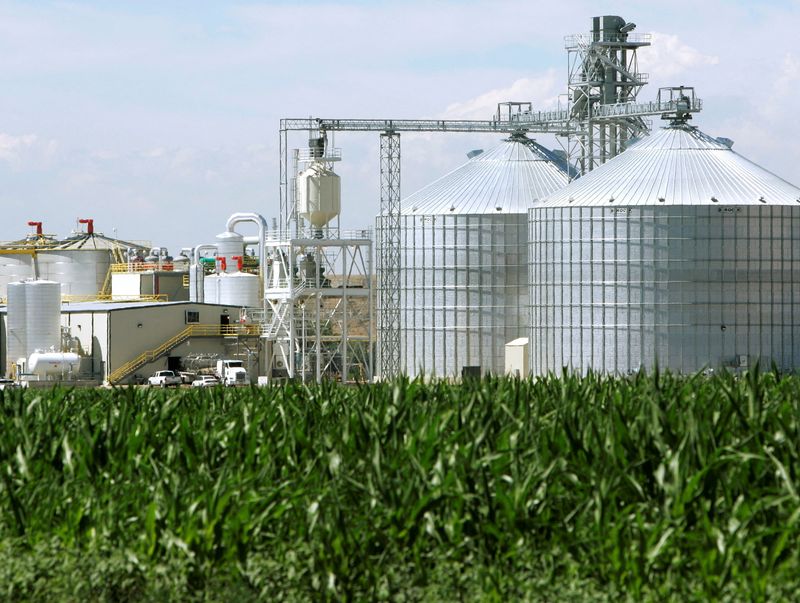 © Reuters. FILE PHOTO: An ethanol plant with its giant corn silos next to a cornfield in Windsor, Colorado July 7, 2006/File Photo

By Stephanie Kelly and Jarrett Renshaw

NEW YORK (Reuters) – A Republican U.S. senator plans to submit federal legislation with the support of a major oil industry trade group that would expand national sales of E15, a higher ethanol-gasoline blend.

Senator Deb Fischer, of Nebraska, the third-largest U.S. corn-producing state, told Reuters on Thursday she believes there is a path forward for year-round sales of E15, which has been opposed in the past by some oil and environmental groups.

Fischer said she would provide more details of the proposed legislation in the coming weeks. If the bill passed, it would be a win for U.S. corn farmers and the ethanol industry. in the United States is made largely from corn.

One of the oil industry’s top trade groups, the American Petroleum Institute (API), and the Renewable Fuels Association earlier this year began discussions to seek a nationwide expansion of E15, according to an industry source familiar with the matter.

“A state-by-state approach would create a boutique fuel market in the Midwest and may negatively impact the reliability of gasoline supply to the region,” said Will Hupman, API’s vice president of downstream policy.

“We urge Congress to pass legislation that allows for the year-round sale of E15 nationwide, cancels the pending requests from the Midwest states, and preserves access to lower ethanol gasoline blends,” said Hupman.

The EPA effectively restricts summertime sales of E15 over concerns that it contributes to smog in hot weather, though research has since shown the higher percentage blend may not increase smog relative to the 10% blend called E10 that is now sold year-round.

The bill would represent just the latest push to win nationwide, year-round sales. A federal appeals court last year struck down the Trump’s administration approval of year-round E15 sales, arguing it did not have the authority. That decision had been sparked by a challenge from the oil refining industry.