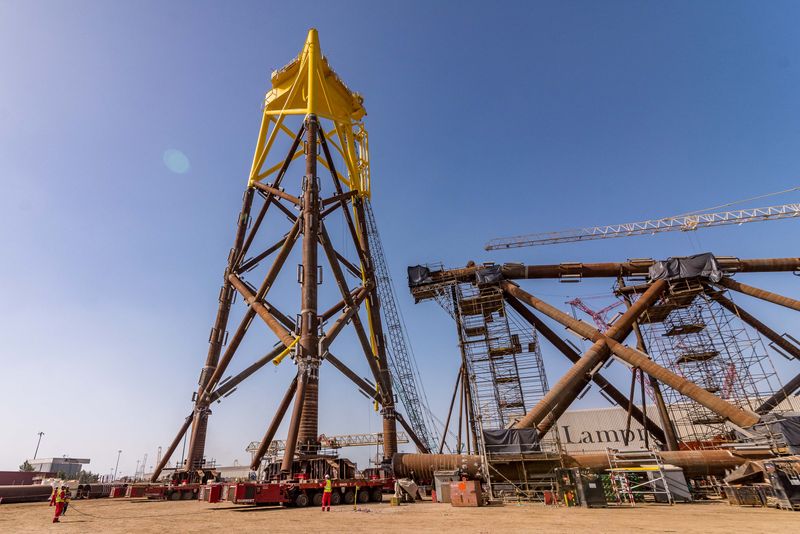 © Reuters. FILE PHOTO: A facility operated by oil and gas services company Lamprell in Dubai, United Arab Emirates is pictured in this handout image provided to Reuters on June 24, 2022. Lamprell/Handout via REUTERS

ABU DHABI (Reuters) -The United Arab Emirates believes OPEC+ made the correct technical choice when it agreed to cut production targets and the unanimous decision had nothing to do with politics, energy minister Suhail al-Mazrouei said on Tuesday.

His comments came after several members of the oil producers group endorsed the steep cut to output targets agreed this month after the White House accused Saudi Arabia of coercing some other nations into supporting the move, a charge Riyadh denies.

OPEC+ comprises the Organization of the Petroleum Exporting Countries and allies including Russia.

“We fully trust and believe in the technical credibility of OPEC and OPEC+. We always meet and discuss the facts based on our analysis of the market and how we can all contribute to taking the right measures to balance the supply and demand, and that decision is always taken unanimously and the last decision was taken on the same logic,” Mazrouei told reporters.

“I would like to reiterate that there is nothing political about any decision we take in OPEC.”

Coming ahead of November mid-term elections in the United States, the move drew sharp criticism from the Biden administration which said there would be “consequences” for U.S. ties with Riyadh.

The United States has stressed the cut would boost Russia’s foreign earnings and blunt the effectiveness of sanctions imposed over its invasion of Ukraine.

Kuwait’s foreign ministry on Tuesday also lent its support to the Saudi stance on the cuts, saying in a statement that the collective decision had a “purely economic framework”.

Mazrouei said the OPEC+ decision stabilised prices, rather than increasing them, adding it was lack of stability that was driving investors away.

“Prices have been stabilising and actually if you look at October 2021 before anything – before all the crises, the geopolitical ones – you would see we are in the same price environment,” the Emirati minister said.

He voiced concern that many oil producers had lost capacity due to lack of investment.

Asked if the UAE planned to ask for a higher baseline as it works to build its own capacity to 5 million barrels per day by 2030, Mazrouei said there was a mechanism for any country to raise that request.

Why Signal won’t compromise on encryption, with president Meredith Whittaker