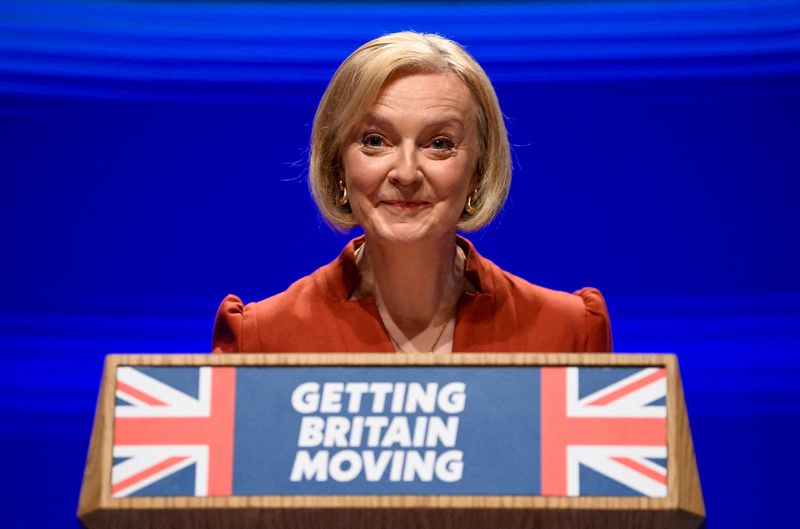 LONDON (Reuters) – Senior British ministers on Sunday urged their colleagues to unite behind Prime Minister Liz Truss, warning that infighting would hand power to the opposition Labour Party at an election due in 2024.

Just over a month into the job, Truss and her team are fighting for credibility after they were forced into a humiliating U-turn over a decision to scrap Britain’s highest rate of income tax.

Her governing Conservative Party’s annual conference last week was beset by division and unrest among the party’s members of parliament (MPs), and opinion polls give Labour a huge lead.

“Those plotting against the prime minister are helping to usher in a Labour government. Conservative MPs should be supporting our party leader, not working against her. Division will only result in drift, delay and defeat,” senior Cabinet Office minister Nadhim Zahawi wrote in Mail on Sunday.

He was one of four cabinet ministers to pen articles for a Sunday newspaper to call on their party to back Truss, ahead of the return of parliament from a short break on Tuesday.

“As a party, we must unite around her now,” interior minister Suella Braverman wrote in the Sun on Sunday.

Truss faces a battle over whether to limit increases in some benefit payments to less than inflation as she seeks ways to fund her tax-cutting growth plan, something many lawmakers say would be inappropriate when millions of families are struggling with the soaring cost of food and energy.

While ministers say they have yet to take a decision, the Sunday Times reported Truss was expected to give in to pressure from ministers to rule out a real-terms reduction in welfare.

It cited two unnamed cabinet ministers saying the government did not have the support to get a vote through parliament on raising benefits in line with earnings rather than inflation.

“She can either get ahead of this now and make it go away or we will be dragged kicking and screaming towards another screeching U-turn when they realise it’s a game of arithmetic and the numbers will not stack up,” it quoted one as saying.

Cabinet minister Penny Mordaunt, who days ago said benefits should rise in line with inflation, wrote in the Sunday Telegraph that tough decisions were needed.

“It’s far easier to embrace the status quo. Anyone can wave to the cameras. Anyone can be all things to all people. That’s the easy bit. You measure leaders when they are in the ring dazzled by the media lights taking punch after punch and taking the hard decisions required,” she wrote.

CoinEx, the Official Sponsor of RLWC 2021, Fires Up the Audience in Manchester – Press release Bitcoin News

Yellowstone closed for first time in 34 years amid flooding, mudslides By Reuters

Trade and security on agenda for Xi visit to Saudi Arabia