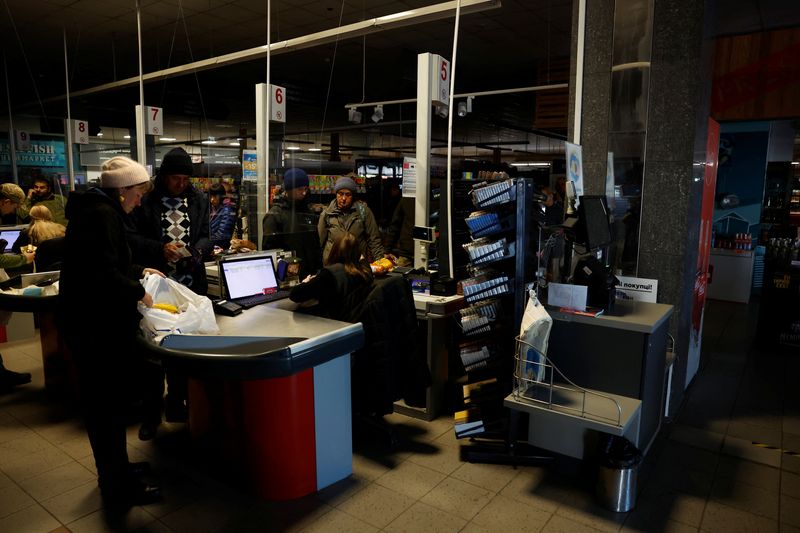 © Reuters. People shop in a supermarket as Kharkiv suffers an electricity outage, amid Russia’s attack on Ukraine, in Kharkiv, Ukraine, October 17, 2022. REUTERS/Clodagh Kilcoyne

KYIV (Reuters) – Ukrainians endured the first scheduled power outages since the war began on Thursday and braced for more after Russian air strikes destroyed infrastructure, as Kyiv’s forces pressed on towards the Russian-occupied city of Kherson.

Ukraine is advancing against Russian troops in the east and the south, but struggling to protect power generating facilities and other utilities from missile and drone strikes that appear designed to disrupt and demoralise as winter approaches.

People across the country were urged to use less power as the government enforced nationwide curbs on electricity usage between 7 a.m. and 11 p.m.

The first such restrictions since Russia’s Feb. 24 invasion included blackouts in some areas, and followed a barrage of Russian attacks that President Volodymyr Zelenskiy said had struck a third of all power plants.

The northeast region of Sumy went without water as some Kyiv grocery stores reported sales of bottled water picking up in preparation for possible shortages there.

“There is much anger against Russian leaders and Russian people,” Mikhaylo Holovnenko, a Kyiv resident, told Reuters.

“But we are ready for outages. We have candles, charged power banks. Ukraine is charged to win.”

“Scorched earth tactics will not help Russia win the war. They will only strengthen the unity and resolve of Ukraine and its partners,” Scholz told the German parliament.

Putin on Thursday inspected a training ground for mobilised troops and was shown firing shots from a sniper rifle in footage apparently intended to show his personal backing for soldiers heading to fight in Ukraine.

Russia’s defence ministry said it was again targeting Ukrainian energy infrastructure, a strategy it has stepped up since the appointment this month of Sergei Surovikin – nicknamed “General Armageddon” by the Russian media – as commander of what Moscow calls its “special military operation” in Ukraine.

Ukrainian Energy Minister Herman Halushchenko told national TV that Russia had carried out more than 300 air strikes on Ukrainian energy facilities since Oct. 10. He said the government was seeking a 20% reduction in energy use as a result.

“We see a voluntary decrease (in electricity consumption). But when it is not enough, we are forced to bring in forced shutdowns,” he said.

Kyiv and Kharkiv announced curbs on the use of electric-powered public transport such as trolleybuses and reduced the frequency of trains on the metro.

“We switched off all electric appliances at home. This must be treated very seriously. So far we have not used the heater,” Lyudmila, a 75-year-old Kyiv resident, told Reuters.

Zelenskiy said on Wednesday that the power problems would take time to resolve.

“We assume that Russian terror will be directed at energy facilities until, with the help of partners, we are able to shoot down 100% of enemy missiles and drones.”

He was due to address a European Union summit later on Thursday.

Leaders of the 27 member states will discuss options for more support to Ukraine, including energy equipment, helping restore power supply and long-term financing to rebuild.

Much of the destruction has been inflicted by Russian drones, which Ukraine and the West say are Iranian-made, something Tehran denies.

European Union members had agreed on new measures against Iran over its supply of drones to Russia, the bloc said, and Britain imposed sanctions on senior military figures and a firm it said were involved in the supply of Iranian drones to Moscow.

A White House spokesman said Washington was looking at imposing new sanctions on Tehran over the drones and considering air defence solutions for Ukraine.

On the ground, the Ukrainian military continued to try to press its advance towards the southern city of Kherson, the only regional capital Russian forces have captured.

The Russian-appointed administration on Wednesday told civilians to leave the city – control of which gives Russia a land route to Crimea, which it seized in 2014, and the mouth of the Dnipro river.

Kherson residents were shown on footage taken by Russian media gathered at the city river port waiting in long queues to board boats to get to the left, eastern bank of the Dnipro River which bisects Ukraine.

Ukraine’s military said in an early Thursday update on the Kherson region that 43 Russian servicemen had been killed and six tanks and other equipment destroyed.

The Russian defence ministry described a battle in the area which it said its forces had won.

Reuters was not able to verify battlefield reports.

‘You’re playing with fire!’ By Reuters