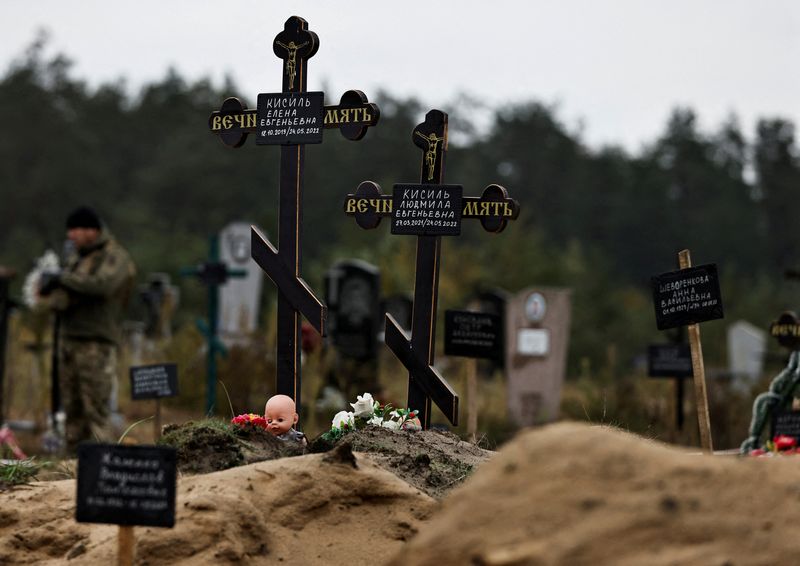 © Reuters. A doll is seen among graves, which Ukrainian officials say is a civilian mass grave, amid Russia’s invasion of Ukraine, in the newly recaptured town of Lyman, Donetsk region, Ukraine, October 11, 2022. REUTERS/Zohra Bensemra

LYMAN, Ukraine (Reuters) – Ukrainian authorities said on Tuesday they exhumed the bodies of dozens of people, including civilians and a one-year-old baby, to determine the cause of death following the retreat of Russian troops from two recently-liberated towns in the eastern Donetsk region.

“These are local civilians and our defenders, armed forces servicemen,” Donetsk Governor Pavlo Kyrylenko said as forensic workers in white suits moved around one of the sites at a cemetery in Lyman, retaken from Russian forces on Oct. 1.

He said the bodies of 55 people had been exhumed in the town, including civilians. The prosecutor general’s office said authorities had counted 110 trenches containing graves, including some for children, at the Nova Maslyakivka cemetery.

“The youngest is only one year old,” it said in a statement on its website. “She is buried next to the whole family.”

A doll rested against the foot of one cross marking a grave with the name Yelena Kisil, born Oct. 18, 2019, alongside another cross marking the grave of Lyudmila Kisil, born March 27, 2021. Both died on May 24, 2022, during the period when Russian forces were battling to seize Lyman.

“We also don’t exclude torture, especially among the civilian victims,” he said. But only court medical experts would be able to tell for sure, he added.

Reuters could not independently determine the causes or timing of the deaths.

At a separate site about 20 km (15 miles) to the west in the town of Sviatohirsk, the prosecutor general’s office said law enforcement officers had exhumed 34 bodies, some of which it said showed signs of violent death, including gunshot wounds, rib and skull fractures, and mine and explosive injuries.

“The burnt bodies of two citizens were also found in a car,” it said in the statement. “Their identities are being established.”

Last month the bodies of 436 people were exhumed from a burial site in the northeastern town of Izium after it was liberated. Most appeared to have died violent deaths, local officials said.

The End of the World is Nigh

Canada’s real problem is not job losses, it’s the rush to retire By Reuters

Factbox-Voters in five U.S. states to decide on legalizing marijuana in November midterms By Reuters