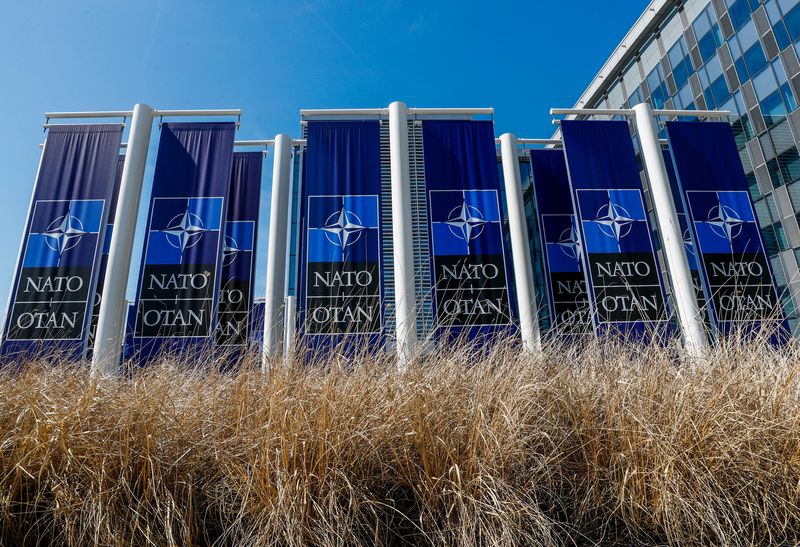 © Reuters. FILE PHOTO: Banners displaying the NATO logo are placed at the entrance of new NATO headquarters during the move to the new building, in Brussels, Belgium April 19, 2018. REUTERS/Yves Herman

U.S. Defense Secretary Lloyd Austin, sitting next to his Ukrainian counterpart, opened the gathering of more than 50 countries by condemning Russian President Vladimir Putin’s deadly missile attacks against “targets with no military purpose” across Ukraine.

“The whole world has just seen yet again the malice and cruelty of Putin’s war of choice, rooted in aggression and waged with deep contempt for the rules of war,” Austin told the gathering, sitting next to Ukrainian Defense Minister Oleksii Reznikov.

“But Russia’s latest assaults have only deepened the determination of the Ukrainian people and further united countries of goodwill from every region on Earth.”

The Russian air attacks killed 19 people in Ukraine, wounded more than 100 and knocked out power supplies across the country, adding new urgency to Kyiv’s long-standing calls for air defenses to protect its cities.

NATO chief Jens Stoltenberg called Russia’s missile attacks a sign of weakness, after weeks of Ukrainian gains that have set off rare criticism inside Russia of its war effort.

“Ukraine has the momentum and continues to make significant gains, while Russia is increasingly resorting to horrific and indiscriminate attacks on civilians and critical infrastructure.”

Germany announced that the first of four IRIS-T air defense systems had reached Ukraine. German Defense Minister Christine Lambrecht called it a “very important support for Ukraine in the fight against missile attacks”.

A senior U.S. defense official, speaking on condition of anonymity, said Germany’s IRIS-T system was another sign of the commitment to provide air defenses to Ukraine, predating Putin’s latest missile strikes on the country.

“Again this is a horrible set of circumstances, what’s occurred,” the official said. “But the fact that Russia has this capability and is willing to use that capability, including against civilian infrastructure and civilian targets, is not a surprise.”

The gathering in Brussels is the first big NATO meeting since Moscow annexed several Ukrainian territories, announced a mobilization and issued veiled nuclear threats – moves that the alliance has classified as a clear escalation of the war that started with the invasion of Ukraine on Feb 24.

A senior NATO official said a Russian nuclear strike would change the course of the conflict and almost certainly trigger a “physical response” from Ukraine’s allies — “and potentially from NATO itself.”

The official did not detail what a physical response might entail.

Attacks on the Nord Stream pipelines running under the Baltic Sea have contributed to heightening the tensions, although it remains unclear who was behind the explosions.

NATO warned Moscow on Tuesday that it would meet attacks on allies’ critical infrastructure with a “united and determined response”.

Stoltenberg pledged to boost the protection of critical infrastructure, saying NATO had already doubled its presence in the Baltic and North seas to more than 30 ships supported by aircraft and undersea activities.

Speaking ahead of the two-day meeting of the alliance’s defense ministers, Stoltenberg said that while the alliance had not seen any changes in Russia’s nuclear posture, it was vigilant and would proceed with its annual nuclear preparedness exercise next week.

He was referring to the “Steadfast Noon” exercise, in which NATO air forces practise the use of U.S. nuclear bombs based in Europe with training flights, without live weapons.

Cancelling the drills because of the war in Ukraine would send a “very wrong signal”, Stoltenberg said.

“It’s an exercise to ensure that our nuclear deterrent remains safe, secure and effective,” he said, adding NATO’s military strength was the best way to prevent any escalation of tensions.

Moscow, which calls its actions in Ukraine a “special military operation” to eliminate dangerous nationalists and protect Russian-speakers, has accused the West of escalating the conflict by supporting Kyiv.

Detente and dollars By Reuters