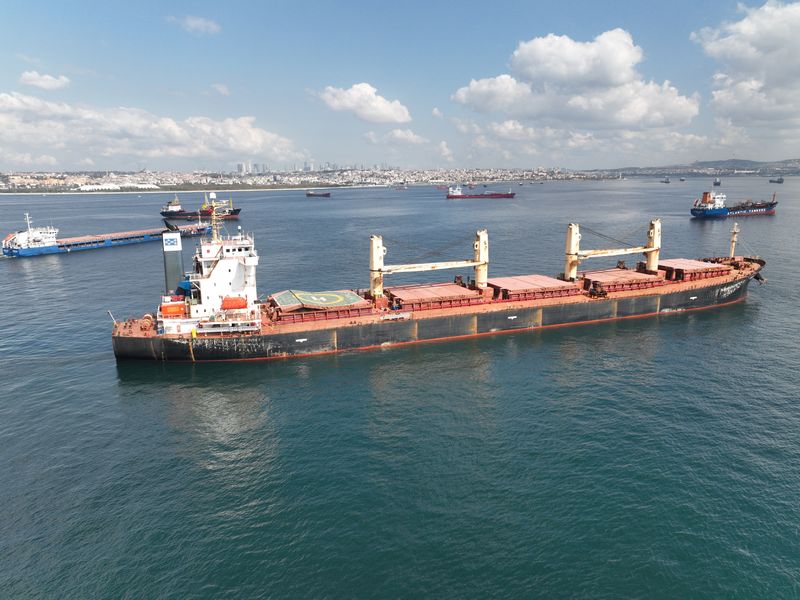 By Jonathan Spicer and Can Sezer

ISTANBUL (Reuters) – With nearly 100 grain-laden ships reaching towards the horizon off Istanbul, the U.N. official overseeing exports from Ukraine is asking Russia and other parties to end “full-blown” inspections of outgoing vessels to ease the backlog.

Ukraine has exported more than 6.8 million tonnes of grain and other foodstuffs, about a third of its storage, since a sea corridor from the war-torn country opened in July.

The U.N. says the safe passage deal signed by Moscow and Kyiv eased a global food crisis. But as more shippers have joined, the handful of teams inspecting cargo and crew transiting Turkish waters started to fall behind, leaving scores of tankers anchored in the Marmara Sea.

The four parties to the deal – Russia, Ukraine and brokers Turkey and the United Nations – are currently negotiating a possible extension and expansion beyond its Nov. 19 deadline.

“There will need to be a change and I hope we can negotiate a better way of doing (inspections)” as part of those talks, Abdulla told Reuters in an interview at the four-party Joint Coordination Centre (JCC) in Istanbul.

On Monday, 96 outgoing ships carrying some 2.1 million tonnes of cargo were awaiting inspections, with one held up for about 20 days, a Reuters analysis of JCC data found. Including those returning empty to Ukraine, the JCC said the backlog was 120 last week.

“There has to be a check, but that check need not be a full blown inspection,” Abdulla said, adding: “I have suggested … maybe a spot check or check particular vessels.”

The delays worsened from mid-September, with wait times for inspections doubling to about 10 days by September 21, the Reuters analysis found. About 70% of ships that departed Ukraine after that date were still awaiting inspections.

The Kremlin and Russia’s defence ministry did not respond to requests for comment about adjusting inspections.

‘WE NEED TO DO MORE’

Ukrainian Agriculture Minister Mykola Solskyi told Reuters last week that officials in Istanbul had “not adequately” explained why inspections had “slowed” in the last two weeks.

Abdulla said the backlog is due to rising export volumes and a lack of readiness aboard some vessels, including the needed test equipment, fumigation and documents.

He is pushing for clearance from Russia, Ukraine and Turkey to double the number of four-party inspection teams to eight.

“Quite honestly, we need to do more,” he said.

The JCC said it has conducted more than 500 inspections at an average rate of 10-11 per day in September and October, up from four in August. But a lack of onboard preparedness meant that inspectors needed to return a second time on 50 occasions.

Russia has criticized the grains deal and complained its exports were still hindered, and it could reject an extension.

The U.N. is working to extend it for a year and expand it to include Russian fertilizer exports like ammonia via Ukraine, which was a central aspect of the original deal.

Though not directly involved in talks to extend the deal, Abdulla said he expects Russian ammonia exports to be added and noted Ukraine could seek to expand the corridor east to its Mykolaiv port.

“Once we start the exports of ammonia – when, not if – we will need to review the whole inspection regime anyway,” he said. “We are at the early stages of discussing it.”

Two never-published NES games are up for auction on eBay

70+ Best Educational Netflix Shows for Kids and Teens in 2022