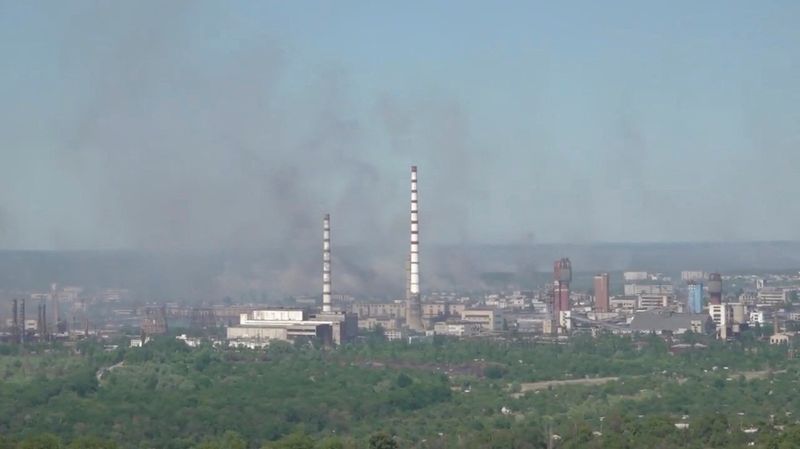 KYIV (Reuters) – Ukraine remains in control of the Azot chemical plant in Sievierodonetsk where hundreds of civilians are sheltering, the region’s governor said on Saturday, after a Russia-backed separatist claimed 300-400 Ukrainian fighters were also trapped there.

“The information about the blockade of the Azot plant is a lie,” Serhiy Gaidai, governor of the Luhansk region partially controlled by pro-Russian separatists, said on the Telegram messaging app.

“Our forces are holding an industrial zone of Sievierodonetsk and are destroying the Russian army in the town,” he wrote.

Sievierodonetsk, a small city in the region, has become the focus of Russia’s advance in eastern Ukraine and one of the bloodiest flashpoints in a war now into its fourth month.

Ukraine has said some 800 people were hiding in several bomb shelters underneath the Azot plant, including about 200 employees and 600 residents of Sievierodonetsk.

Rodion Miroshnik, a Russian-backed representative of the self-proclaimed Luhansk People’s Republic, said on Saturday that 300 to 400 Ukrainian fighters were blockaded on the grounds of the plant along with civilians and had tried to negotiate their passage to the city of Lysychansk.

“Such demands are unacceptable and will not be discussed,” Miroshnik said, adding that negotiations with fighters about civilians at the plant were under way.

Foreword to Victory: Paul Kennedy on the Naval History of World War II