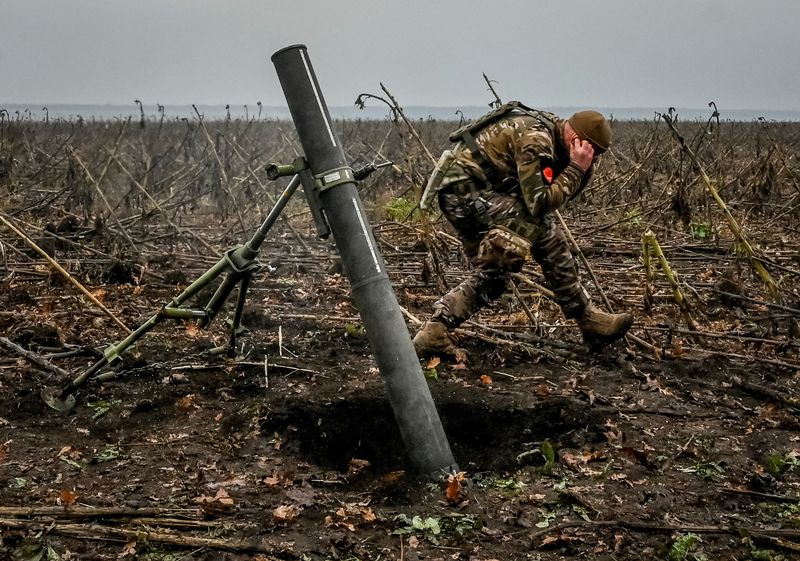 © Reuters. A Ukrainian serviceman fires a mortar on a front line, as Russia’s attack on Ukraine continues, in Zaporizhzhia region, Ukraine November 16, 2022. REUTERS/Stringer

By Max Hunder and Jonathan Landay

KYIV/KHERSON, Ukraine (Reuters) -Russian missile strikes have crippled almost half of Ukraine’s energy system, the government said on Friday, and authorities in the capital Kyiv warned that the city could face a “complete shutdown” of the power grid as winter sets in.

With temperatures falling and Kyiv seeing its first snow, officials were working to restore power nationwide after some of the heaviest bombardment of Ukrainian civilian infrastructure in nine months of war.

He was speaking at a joint news conference with a vice-president of the European Commission, Valdis Dombrovskis, who offered Ukraine “unwavering support”.

Engineers have been racing to repair the power grid in Kyiv.

“We are preparing for different scenarios, including a complete shutdown,” Mykola Povoroznyk, deputy head of the Kyiv city administration, said in televised comments.

President Volodymyr Zelenskiy said about 10 million people were without power in a country with a pre-war population of about 44 million. Power supplies were difficult in 17 regions and in the capital, and authorities in some areas ordered forced emergency blackouts, Zelenskiy said in his nightly video address.

Thousands of Russian men have fled abroad to escape conscription to a conflict which has killed thousands, displaced millions, turned cities to ruins and reopened Cold War-era divisions.

Russian forces plundered areas of the southern Kherson region that are now back under Ukrainian control following a counter-offensive, the deputy head of Zelenskiy’s administration said.

“After a trip to the … Kherson region, one thing became clear – our people there need a lot of help. The Russians not only killed and mined but also robbed all the cities and villages. There is practically nothing there,” Kyrylo Tymoshenko said on the Telegram messaging app.

A Reuters witness heard explosions in the centre of Kherson city on Friday morning and saw black smoke rising from behind buildings. Police blocked off access but the commotion did not seem to faze hundreds of people on the central square as they queued for humanitarian aid.

The General Staff of the Ukrainian Armed Forces said in an evening report that Russian forces now redeployed on the east bank of the Dnipro River in Kherson region had shelled towns including Antonivka and Bilozerka on the west bank as well as Chornobaivka, which they had used as a depot for equipment.

Investigators in liberated areas of Kherson region have uncovered 63 bodies bearing signs of torture after the Russian forces left, Ukraine’s interior minister was quoted as saying.

The Ukrainian parliament’s human rights commissioner, Dmytro Lubinets, released a video of what he said was a torture chamber used by Russian forces in the Kherson region.

Separately, Yale University researchers concluded in a report backed by the U.S. State Department that hundreds of people were detained or went missing in Kherson while it was under Russian control, and dozens may have been tortured.

Reuters was unable to verify the various assertions. Russia denies its troops deliberately attack civilians or have committed atrocities.

Mass burial sites have been found in other parts previously occupied by Russian troops, including some with civilian bodies showing signs of torture.

Russia, for its part, accused Ukraine of executing more than 10 Russian prisoners of war with direct shots to the head. Reuters was unable to immediately verify the defence ministry’s statement. There was no immediate response from Kyiv.

Russia has moved some troops from Kherson to reinforce its positions in the eastern Donetsk and Luhansk regions, an industrial area known as the Donbas.

Zelenskiy said Ukrainian forces had repelled about 100 attacks in Donetsk, with no letup in the fighting.

“Very fierce fighting is continuing in Donetsk region,” Zelenskiy said in his Friday night address. “There has been no lull.”

Ukraine’s military said Russian forces had fired shells at a series of towns in eastern and southern Ukraine.

Its evening report said Russian forces trained mortar and artillery fire near Bakhmut – scene of the fiercest fighting in Ukraine – shelling the towns of Bakhmut, Soledar and Bilohorivka.

Also hit by artillery fire were towns further west in Donetsk and in Zaporizhzhia region in southern Ukraine, including Vuhledar and Hulyaipole. Reuters was unable to immediately verify the report.