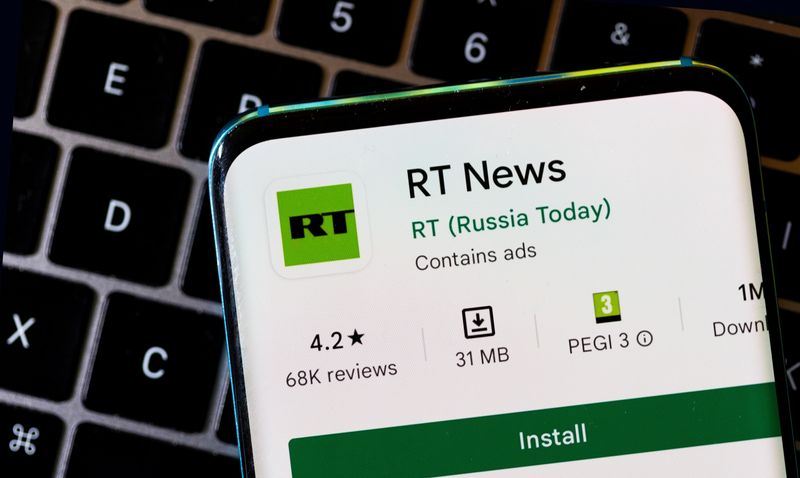 (Reuters) – Ukraine branded the Russian state-controlled RT media outlet as an inciter of genocide on Sunday after a presenter said Ukrainian children who saw Russians as occupiers under the Soviet Union should have been drowned.

In a show broadcast last week, RT presenter Anton Krasovsky said children who criticised Russia should have been “thrown straight into a river with a strong current”.

Krasovsky – a pro-war commentator on Russian TV who has been sanctioned by the European Union – was responding to an account by Russian science fiction author Sergei Lukyanenko about how, when he first visited Ukraine in the 1980s, children told him they would live better lives were it not for Moscow occupying their country.

“They should have been drowned in the Tysyna (river),” Krasovsky said in response. “Just drown those children, drown them.” Alternatively, he said, they could be shoved into huts and burned.

In a short segment of the interview which was shared on social media, Krasovsky also laughed at reports that Russian soldiers had raped elderly Ukrainian women during the invasion.

“Governments which have still not banned RT must watch this excerpt,” Ukraine’s Foreign Minister Dmytro Kuleba said in a tweet that linked to a clip of the interview.

“Aggressive genocide incitement (we will put this person on trial for it), which has nothing to do with freedom of speech. Ban RT worldwide,” Kuleba added.

Russian state television, heavily controlled by the Kremlin, has been a vocal cheerleader of Russia’s invasion of Ukraine. Presenters have routinely dismissed reports of Russian war crimes and many have used airtime to call on Russian President Vladimir Putin to adopt an even more aggressive approach to the invasion.

The Kremlin denies its forces have committed war crimes in Ukraine.

Israel stocks higher at close of trade; TA 35 up 0.98% By Investing.com