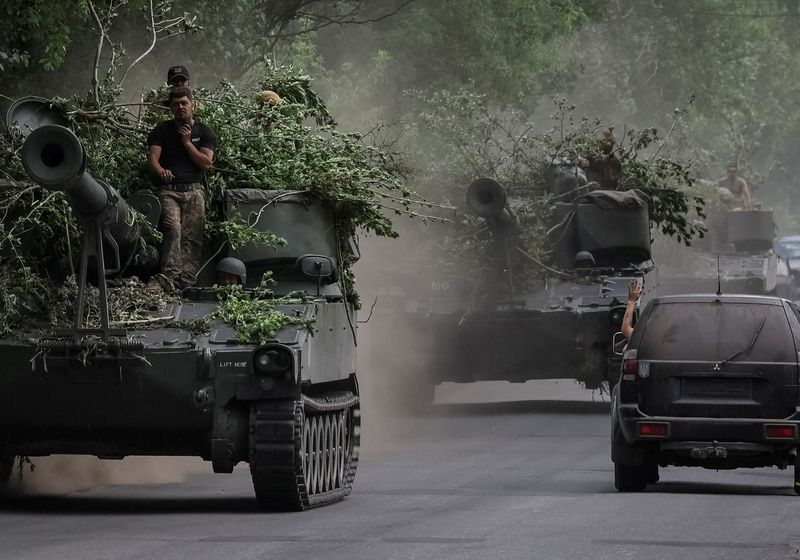 By Idrees Ali and Sabine Siebold

BRUSSELS (Reuters) -Dozens of defense ministers from NATO countries and other parts of the world are expected on Wednesday to discuss weapons deliveries to Ukraine, U.S. officials said, as Kyiv seeks a significant increase in arms to help fend off Russian forces.

Ukraine needs 1,000 howitzers, 500 tanks and 1,000 drones among other heavy weapons, presidential adviser Mykhailo Podolyak said on Monday. Western countries have promised NATO-standard weapons, including advanced U.S. rockets. But deploying them is taking time, and Ukraine will require consistent Western support to transition to new supplies and systems as stocks dwindle of their Soviet-era weapons and munitions.

Wednesday’s meeting in Brussels, on the sidelines of a NATO defense ministerial, is being led by U.S. Defense Secretary Lloyd Austin and the third time the group of nearly 50 countries are meeting to discuss and coordinate help for Ukraine.

Before the start of the meeting, NATO Secretary General Jens Stoltenberg said the allies would continue to supply Ukraine with heavy weapons and long-range systems and that he expected them to agree a new package of assistance to Kyiv at a NATO summit later this month.

“Sometimes these efforts take time. That’s exactly why it is important to have a meeting like we have today… to meet with the Ukrainian representatives to identify the challenges and the issues they would like to raise with us when,” Stoltenberg said.

The United States has committed about $4.6 billion in security assistance to Ukraine since Russia’s Feb. 24 invasion, including artillery systems such as howitzers and longer-range weapons like the High Mobility Artillery Rocket System (HIMARS).

“Russia has not given up on the fight, despite its pretty anemic progress… What we have is this grinding, slow, incremental Russian operation,” said a senior U.S. defense official, speaking on the condition of anonymity.

“So the question is what do the Ukrainians need to continue the success they’ve already seen in slowing down and thwarting that Russian objective and that’ll be a major focus for the defense ministers,” the official said.

Lewis told Reuters in an interview on Friday that allies could ask for many defense articles to help backfill arms sent to Ukraine.

“I expect we’ll see the whole range here. So not just air defense, but I think people will be looking at, you know, if they provided tanks, that’s something they could be looking for,” Lewis said

That could include tanks made by General Dynamics Corp (NYSE:) or air defense systems from companies like Lockheed Martin (NYSE:) or Raytheon Technologies (NYSE:).

Russia launched what it calls a “special operation” in Ukraine in February, saying it was needed to rid the country of dangerous nationalists and degrade Ukraine’s military capabilities – aims the West denounced as a baseless pretext.

The Biden administration has said it has received assurances from Kyiv that those longer-range weapons will not be used to attack Russian territory, fearing an escalation of the conflict.

Kyiv has said it is losing 100 to 200 soldiers each day, with hundreds more wounded. In an overnight address, President Volodymyr Zelenskiy described the battle for the eastern Donbas region – partly occupied by Moscow proxies since 2014 – as one of the most brutal in European history.

EOS Falls 10% In Rout By Investing.com

The Curious Case of Kulbhushan Jadhav –...