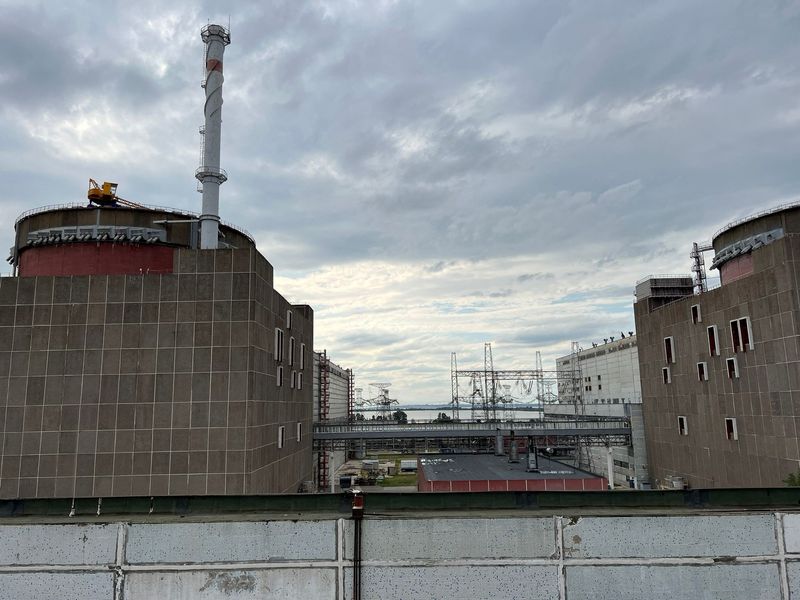 © Reuters. FILE PHOTO: A view shows the Russian-controlled Zaporizhzhia Nuclear Power Plant during a visit by members of the International Atomic Energy Agency (IAEA) expert mission, in the course of Ukraine-Russia conflict outside Enerhodar in the Zaporizhzhia regi

KYIV (Reuters) -Ukrainian President Volodymyr Zelenskiy has told Europeans to expect a difficult winter as the Russian assault on his country leads to cuts in oil and gas exports by Moscow.

Zelenskiy was speaking on Saturday night after Moscow shut down a main pipeline that supplies Russian gas to the continent.

“Russia is preparing a decisive energy blow on all Europeans for this winter,” he said in his daily video address.

Moscow has cited Western sanctions imposed over its invasion of Ukraine and technical issues for the energy disruptions. European countries who have backed the Kyiv government with diplomatic and military support have accused Russia of weaponising energy supplies.

Some analysts say the shortages and a surge in living costs as winter approaches risk sapping Western support for Kyiv as governments try to deal with disgruntled populations.

The Kremlin said it would stop selling oil to any countries that implemented the cap.

German Chancellor Olaf Scholz said on Sunday his government had been planning for a total halt in gas deliveries in December but he promised that his country would make it through the winter.

“Russia is no longer a reliable energy partner,” Scholz told a news conference in Berlin.

POWER LINE DOWN AT ZAPORIZHZHIA

The last remaining main external power line was cut off although a reserve line continued supplying electricity to the grid, the International Atomic Energy Agency (IAEA) said in a statement.

Only one of its six reactors remained in operation, it said.

The plant was seized by Russian troops shortly after President Vladimir Putin sent his army over the border on Feb. 24 and has become a focal point of the conflict.

Each side has blamed the other for shelling in the vicinity that has raised fears that a nuclear disaster could be triggered.

An official from the Russian-installed administration in Zaporizhzhia said the situation around the plant had been calm so far on Sunday.

Speaking to Komsomolskaya Pravda radio, the official, Vladimir Rogov, said there had been no shelling or incursions. Russia has twice accused Ukraine of trying to capture the plant in the past two days. Ukraine said Russia had attacked the area itself.

IAEA experts are expected to continue working at the plant until at least Monday, Rogov was quoted as saying.

An IAEA mission toured the plant, which is still operated by Ukrainian staff, last week and some experts have remained there pending the release of an IAEA report.

The plant said in a statement on Saturday the fifth reactor was switched off “as a result of constant shelling by Russian occupation forces” and that there was “insufficient capacity from the last reserve line to operate two reactors”.

Zelenskiy has blamed Russian shelling for an Aug. 25 cutoff, the first Zaporizhzhia was severed from the national grid, which narrowly avoided a radiation leak. That shutdown prompted power cuts across Ukraine.

Ukraine and the West accuse Russia of storing heavy weapons at the site to discourage Ukraine from firing on it. Russia, which denies having any such weapons there, has resisted international calls to relocate troops and demilitarise the area.

On other battlefronts, Ukrainian Telegram channels reported explosions at the Antonivsky bridge near the southern city of Kherson, which is occupied by Russian forces.

The bridge has been severely damaged by Ukrainian missiles over the past weeks, but Russian troops were trying to repair it or to set up a pontoon crossing or barges to maintain supplies to Russian units on the right bank of the Dnipro river.

Ukraine began a counter-offensive last week targeting the south, particularly the Kherson region, which was seized by the Russians early in the conflict.