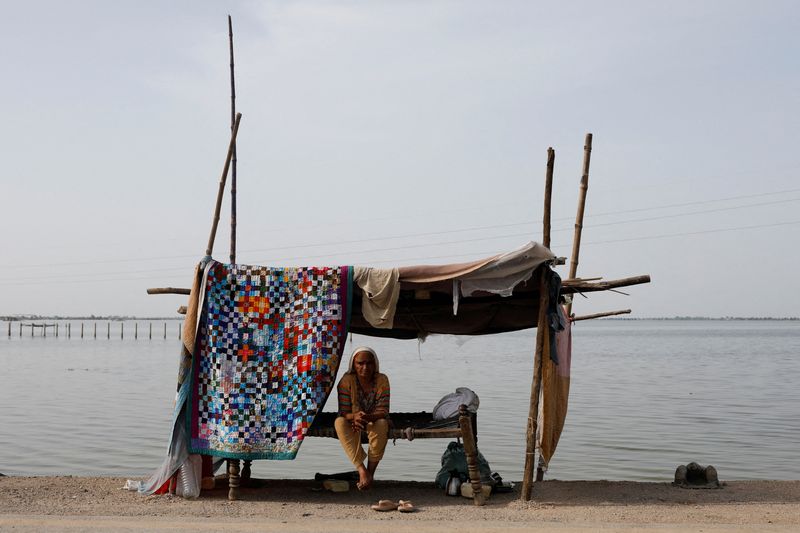 © Reuters. A flood victim takes refuge along a road in a makeshift tent, following rains and floods during the monsoon season in Mehar, Pakistan August 29, 2022. REUTERS/Akhtar Soomro

ISLAMABAD (Reuters) – The United Nations issued a flash appeal on Tuesday for $160 million to help Pakistan cope with catastrophic floods that have killed more than 1,100 people, destroyed infrastructure and crops, and affected 33 million people.

Early estimates put the damage from the floods at more than $10 billion, the government has said, adding that the world had an obligation to help the South Asian country cope with the effects of man-made climate change.

“Pakistan is awash in suffering,” U.N. Secretary General Antonio Guterres said in a video message for the launch of the appeal in Islamabad and Geneva.

“The Pakistani people are facing a monsoon on steroids – the relentless impact of epochal levels of rain and flooding.”

He said the scale of needs, with millions of people forced from their homes, schools and health facilities destroyed and livelihoods shattered by the climate catastrophe, required the world’s collective and prioritised attention.

Torrential rain has triggered flash floods that have crashed down from northern mountains, destroying buildings and bridges, and washing away roads and crops.

Huge volumes of water are pouring into the Indus river, which flows down the middle of the country from its northern peaks to southern plains, bringing flooding along its length.

Guterres said the $160 million he hoped to raise with the appeal would provide 5.2 million people with food, water, sanitation, emergency education and health support.

Pakistan estimates the floods have affected more than 33 million people, or more than 15% of its 220 million population.

Guterres appealed for a speedy response to Pakistan’s request to the international community for help.

“Let us all step up in solidarity and support the people of Pakistan in their hour of need,” he said.

“Let’s stop sleepwalking towards the destruction of our planet by climate change.”