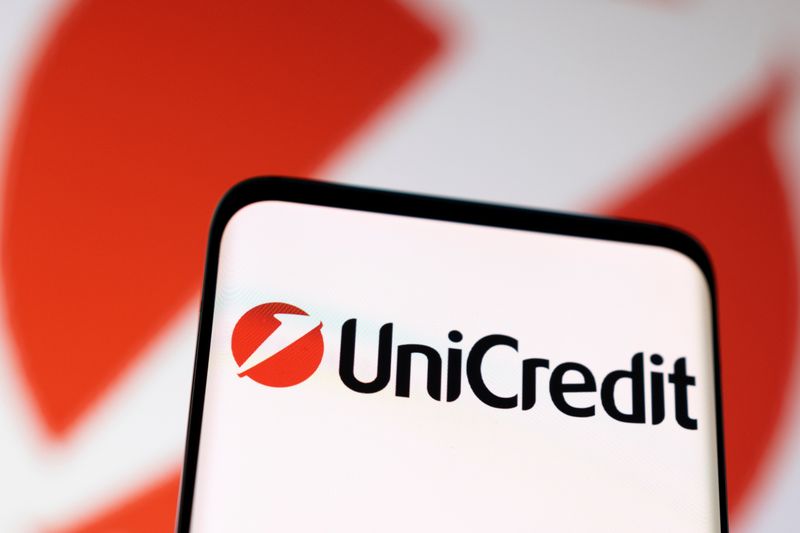 MILAN (Reuters) – UniCredit on Wednesday said it had gained supervisory approval for a new share buyback of up to 1 billion euros ($1 billion), putting it on track to hit its capital distribution goals despite economic recession risks.

Analysts welcomed the European Central Bank’s green light for the second tranche of UniCredit’s buyback, saying it highlighted a case-by-case approach with positive implications for other lenders such as Nordea and ING.

UniCredit’s large exposure to Russia had appeared to threaten its capital distribution plans when the Ukraine conflict first broke out. UniCredit said in March it would only execute the buyback in full if its core capital ratio remained above 13% despite the impact of the Russia crisis.

Since then, however, the bank has completed a first 1.58 billion euro buyback, repurchasing 7.4% of its own share capital. In July it went on to seek ECB clearance for the second tranche, on which shareholders will vote on Sept. 14.

“Given the risks stemming from the bank’s Russian exposure along with the current macroeconomic uncertainty/risks, we believe that the buyback approval is a vote of confidence for UniCredit,” Berenberg analysts said.

The latest buyback amounts to 32 basis points of UniCredit’s highest quality capital ratio, which stood at 15.73% at the end of June.

Under new CEO Andrea Orcel, the former investment banking chief at UBS, UniCredit has embarked on a strategy that strives to maximise capital, generating 67 basis points in capital in the second quarter.

Orcel has expressed confidence UniCredit will be able to replicate in 2022 the distribution goal achieved over 2021 earnings – which totals 3.75 billion euros when including the two buybacks and cash dividends – despite the economic slowdown.

“A lot would need to happen on the macro front for the distribution plan to fall apart, in our view,” broker Autonomous said, adding the stock was cheap even when considering political uncertainty in Italy ahead of snap polls on Sept. 25.

UniCredit said the ECB had approved the buyback after analysing the bank’s capital projections under conservative assumptions and updated adverse macroeconomic scenarios.

The ECB had said in June it would ask banks to factor in a potential recession when calculating their capital trajectories as part of discussions with supervisors over capital distribution plans.

Everything Apple Watch Pro needs to beat Garmin and Samsung

Fire near French city of Lyon kills 10, including children By Reuters