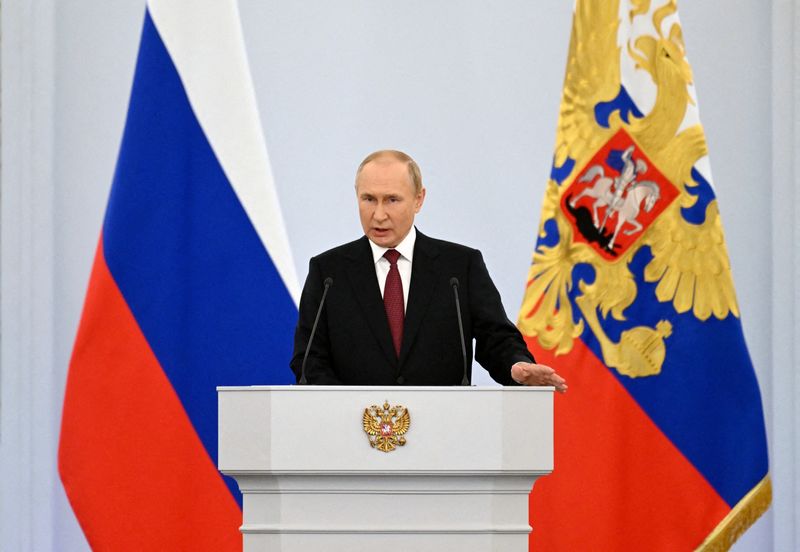 © Reuters. FILE PHOTO: Russian President Vladimir Putin delivers a speech during a ceremony to declare the annexation of the Russian-controlled territories of four Ukraine’s Donetsk, Luhansk, Kherson and Zaporizhzhia regions, after holding what Russian authorities c

UNITED NATIONS (Reuters) -The United Nations General Assembly on Wednesday overwhelmingly condemned Russia’s “attempted illegal annexation” of four partially occupied regions in Ukraine and called on all countries not to recognize the move, strengthening a diplomatic international isolation of Moscow since it invaded its neighbor.

Three-quarters of the 193-member General Assembly – 143 countries – voted in favor of a resolution that also reaffirmed the sovereignty, independence, unity and territorial integrity of Ukraine within its internationally recognized borders.

“It’s amazing,” Ukraine’s U.N. Ambassador Sergiy Kyslytsya told reporters after the vote as he stood next to U.S. Ambassador to the United Nations, Linda Thomas-Greenfield, who said the result showed Russia could not intimidate the world.

Only four countries joined Russia in voting against the resolution – Syria, Nicaragua, North Korea and Belarus. Thirty-five countries abstained from the vote, including Russia’s strategic partner China, while the rest did not vote.

“Today it is Russia invading Ukraine. But tomorrow it could be another nation whose territory is violated. It could be you. You could be next. What would you expect from this chamber?” Thomas-Greenfield told the General Assembly before the vote.

Moscow in September proclaimed its annexation of four partially occupied regions in Ukraine – Donetsk, Luhansk, Kherson and Zaporizhzhia – after staging what it called referendums. Ukraine and allies have denounced the votes as illegal and coercive.

The General Assembly vote followed a veto by Russia last month of a similar resolution in the 15-member Security Council.

Russia’s U.N. Ambassador Vassily Nebenzia told the General Assembly ahead of the vote that the resolution was “politicized and openly provocative,” adding that it “could destroy any and all efforts in favor of a diplomatic solution to the crisis.”

The moves at the United Nations mirror what happened in 2014 after Russia annexed Ukraine’s Crimea. The General Assembly then adopted a resolution declaring the referendum invalid with 100 votes in favor, 11 against and 58 formal abstentions.

China abstained on Wednesday because it did not believe the resolution will be helpful, China’s Deputy U.N. Ambassador Geng Shuang said.

The United States and other Western countries lobbied ahead of Wednesday’s vote. U.S. Secretary of State Antony Blinken convened a virtual meeting on Tuesday with diplomats from more than 100 countries.

They won dozens more votes than compared with the 2014 result, and improved on the 141 countries who voted to denounce Russia and demand it withdraw its troops from Ukraine within a week of its Feb. 24 invasion.

Moscow has then been trying to chip away at its international isolation. As Russia and the West have vied for diplomatic influence, some states – particularly in the global South – have grown concerned about paying the price for being squeezed in the middle of an intense geopolitical rivalry.

“We deplore the politics of the double standards of the powerful of this world when it comes to Africa,” Democratic Republic of Congo U.N. Ambassador Georges Nzongola-Ntalaja told the General Assembly on Wednesday.

“We support Ukraine. We want to see the war ended,” he said. “But we would like to see the international community take similar action against other situations in the world where countries are being invaded and occupied.”

Searching for the Elusive Rules-Based Order