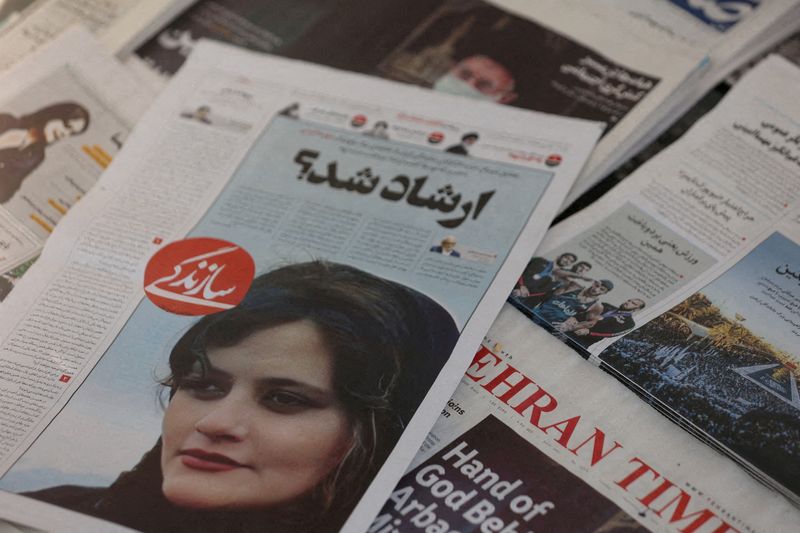 © Reuters. FILE PHOTO: A newspaper with a cover picture of Mahsa Amini, a woman who died after being arrested by Iranian morality police is seen in Tehran, Iran, September 18, 2022. Majid Asgaripour/WANA (West Asia News Agency) via REUTERS/File Photo

Protests ignited by the death in morality police custody of Mahsa Amini on Sept. 16 after her arrest for inappropriate attire have shaken Iran’s clerical establishment with people from all layers of society demanding wholesale political change.

The nationwide demonstrations which have called for the death of Supreme Leader Ayatollah Ali Khamenei are posing one of the boldest challenges to Iran’s rulers since the 1979 Islamic Revolution.

The Amini case and the crackdown on the protests that followed her death drew international condemnation for Iran’s rulers.

Iranian leaders, meanwhile, have blamed the crisis on the United States and other Western powers, a narrative few Iranians believe.

“Those who think the U.S. is an untouchable power are wrong,” Khamenei said. “It is completely vulnerable as seen with current events.”

Iranian lawmaker Mohammad Saleh Jokar said Iranians living abroad who are provoking “riots” at home should have their citizenships revoked.

Defying a harsh warning by the chief of the widely feared elite Revolutionary Guards, Iranians have risked their lives and arrest by remaining in the street despite a bloody crackdown.

One video dated Oct. 22 that went viral on social media showed a dozen riot police beating a man at night on a street in southern Tehran. One of the officers on a motorbike ran him over then another shot him at close range. Reuters could not verify the authenticity of the footage.

“This shocking video sent from Tehran today is another horrific reminder that the cruelty of Iran’s security forces knows no bounds,” Amnesty International said on Twitter about the Oct. 22 video.

“Amid a crisis of impunity, they’re given free rein to brutally beat & shoot protesters. @UN_HRC must urgently investigate these crimes.”

Other videos of the beating of protesters, which Reuters has been unable to verify, have also spread online.

Iran’s police issued a communique on Tuesday saying that a special order was issued to examine the details of a video showing police officers beating a citizen, without giving any detail on the video in question.

“The police does not approve of harsh and unconventional treatment, the offending police officers will certainly be dealt with according to the law,” the statement read, according to Tasnim news agency.

The activist HRANA news agency said around 300 people had been killed in the unrest, including 46 minors. Iran said at least 36 members of the security forces were also killed.

The crisis has hit Iran’s currency. The U.S. dollar was selling for as much as 342,600 rials on the unofficial market on Wednesday, losing nearly 7% of its value since the protests started, according to Bonbast.com.

On Monday night, security forces went to the house of prominent economist Davoud Souri and arrested him. The officers took his laptop and mobile phone with them, and after his arrest, they informed his family that he was at Evin prison, according to a social media post that Reuters could not verify.

Iranian media published on Wednesday a video of the arrest of famous Iranian rapper Toomaj Salehi, showing him blindfolded and saying he did not mean what he had said in previous comments critical of the authorities.

He was detained following his release of several rap clips in support of the protests.

The Flipper Zero is a Swiss Army knife of antennas