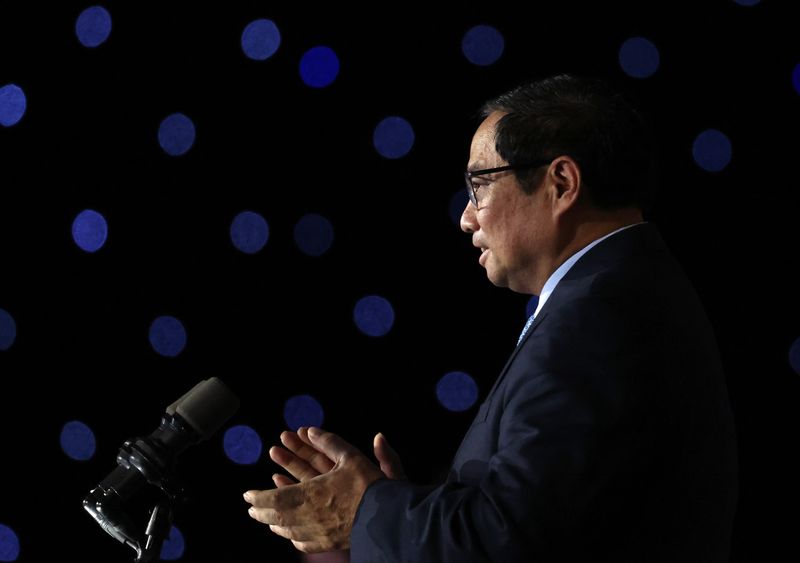 The Southeast Asian economy has rebounded from the COVID-19 pandemic, but has recently faced numerous challenges, with weakening global demand and a strengthening U.S. dollar.

The central bank has this year raised its policy rates by a combined 200 basis points and allowed the dong currency to weaken against dollar.

Vietnam’s stock market has fallen by more than 20% while the dong currency has lost 6% against dollar over the past three months.

“It’s getting more difficult to manage the macro economy,” Chinh said. “We need to stay vigilant (against risks) but we won’t get panic.”

Vietnam’s gross domestic product is expected to grow 8% this year, faster than an expansion of 2.58% last year. The country targets to cap inflation at 4% this year.

Chinh said the country will continue to “pursue an active, prudent, flexible and sturdy monetary policy in harmony coordination with fiscal policy and other policies, without abrupt changes”.

“The bond and stock markets now bear risks after a period of strong growth, with businesses having high demand for capital for production while banks’ credit is tight,” Chinh told parliament, adding that the real estate market is facing liquidity problems.

Chinh said the government will take measures to ensure that the financial and real estate markets operate in a more transparent and effective manner.

“The government will propose amendments to securities and enterprise laws and related regulations,” Chinh said.

Chinh said the authorities have been slow in responding to a fuel supply crunch that has left hundreds of petrol stations having shut or limited sales in recent weeks, citing financial difficulties and tight domestic supplies.