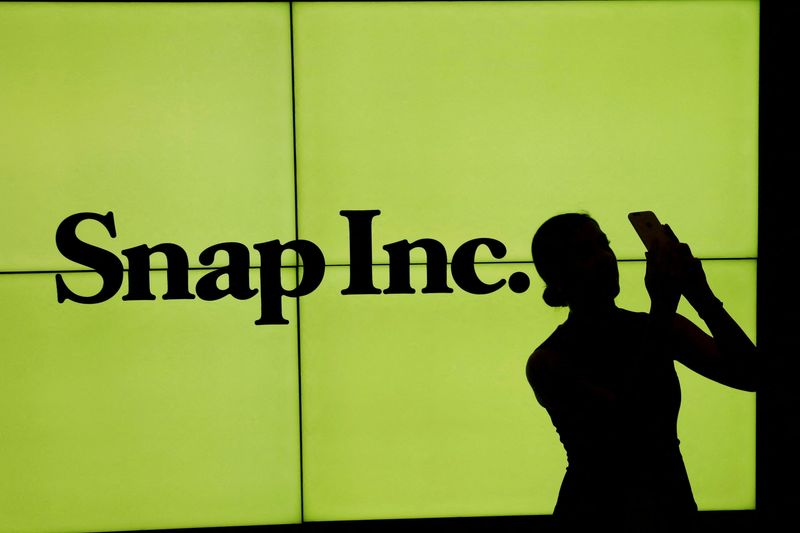 © Reuters. FILE PHOTO: A woman stands in front of the logo of Snap Inc on the floor of the New York Stock Exchange (NYSE) in New York City, NY, U.S. March 2, 2017. REUTERS/Lucas Jackson

NEW YORK (Reuters) – U.S. stocks surged to close out the trading week on Friday after a report said the U.S. Federal Reserve will likely debate on a smaller interest rate hike in December, raising hopes the central bank may be poised to adopt a less aggressive policy stance.

Some Fed officials have begun sounding out their desire to slow down the pace of increases soon, according to a Wall Street Journal report, and how to signal plans to approve a smaller increase in December.

San Francisco Federal Reserve President Mary Daly echoed that sentiment and said it’s time to start talking about slowing the pace of the hikes in borrowing costs and doing so should avoid sending the economy into an “unforced downturn” by hiking interest rates too sharply.

In addition, Chicago Federal Reserve Bank President Charles Evans reiterated his stance the Fed should get policy to “a bit above” 4.5% by early next year and then hold it there.

Analysts widely expect the Fed to hike rates by 75 basis points for a fourth straight meeting in November. Equities have been under pressure this year as the central bank has embarked on an aggressive rate hike path as it attempts to reign in stubbornly high inflation, increasing worries of a policy error that will send the economy into a recession.

“You had the (report) and then you had some confirmation that 75 seems to be pretty baked in for November here but perhaps there is room to slow and extend… rather than front-load so high and then have to peel off, you kind of ease to your 4.75% or 5% peak,” said Tom Hainlin, senior investment strategist at U.S. Bank Wealth Management in Minneapolis, Minnesota.

“Then maybe just hold there for a while so you are getting a little bit of relief.”

For the week, the S&P 500 climbed 4.74%, the Dow gained 4.89% and the Nasdaq rose 5.22%. Each of the three major indexes notched their biggest weekly percentage gains in four months.

The report helped stocks recover from early losses as Snap Inc (NYSE:) plunged 28.08% after posting its slowest quarterly revenue growth in five years as advertisers cut spending due to inflation and geopolitical woes.

That weighed on other companies that rely heavily on ad revenue such as Meta Platforms Inc, down 1.16% and Pinterest (NYSE:), off 6.40%.

American Express said it built bigger provisions to prepare for potential defaults as an economic downturn looms while Verizon’s profit slid 23% and the carrier missed estimates for wireless subscriber additions.

Next week will bring earnings from names such as Twitter, Microsoft Corp (NASDAQ:), Alphabet (NASDAQ:) and Apple Inc (NASDAQ:).

Despite the recent batch of disappointing results, third-quarter earnings season has so far has been better-than-feared, with growth expectations for S&P 500 companies at 3.1%, according to Refinitiv data, up from 2.8% earlier in the week but still well below the 11.1% forecast at the start of July.

Schlumberger (NYSE:) shot up 10.33% to help to lift the S&P 500 energy sector 2.76% after reporting a quarterly profit above expectations.

Volume on U.S. exchanges was 12.15 billion shares, compared with the 11.57 billion average for the full session over the last 20 trading days.

Advancing issues outnumbered declining ones on the NYSE by a 2.59-to-1 ratio; on Nasdaq, a 2.03-to-1 ratio favored advancers.

Best Kindness Books for Kids, as Recommended by Teachers