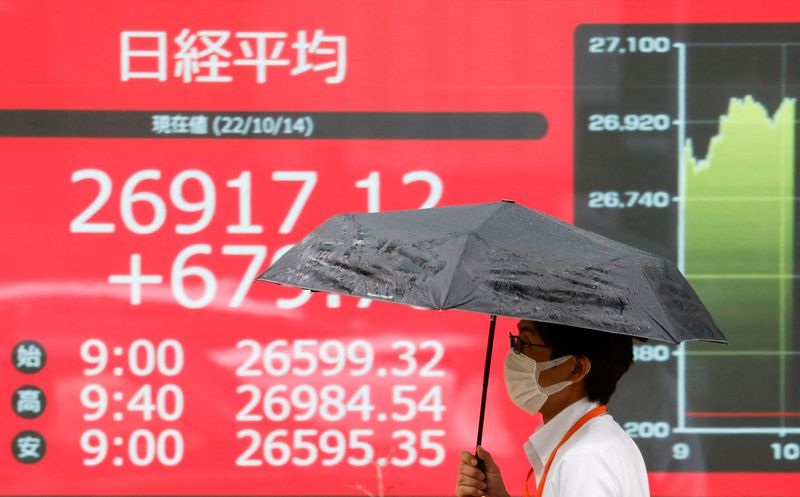 © Reuters. A man walks past in front of an electric monitor displaying the Japanese Nikkei share average in Tokyo, Japan October 14, 2022 REUTERS/Issei Kato

By Sinéad Carew and Carolyn Cohn

NEW YORK, LONDON (Reuters) – Wall Street stocks went into reverse after initially gaining at Friday’s open, while the dollar was rising in a volatile session as investors digested Russia’ suggestion that it would ease attacks against Ukraine, the British prime minister’s firing of her finance minister and the start of U.S. earnings season.

Oil settled sharply lower as recession concerns translated to worries about demand and the potential for easing tensions between Russia and Ukraine added pressure. [O/R]

After escalating attacks on Ukraine in recent days, Russian President Vladimir Putin said his call-up of Russian reservists would end soon with no plans for a further mobilization and no need for massive new strikes on Ukraine.

As the session wore on, U.S. equity declines deepened with oil prices pushing energy stocks down most. Buyers were reluctant to step in after Thursday’s big rally, according to Mona Mahajan, senior investment strategist at Edward Jones.

While traders stepped in to cover bearish bets on Thursday despite higher-than-expected inflation data, Mahajan noted that stocks headed lower on Friday after a University of Michigan survey showed rising inflation expectations.

The pan-European index rose 0.56% and MSCI’s gauge of stocks across the globe shed 1.25%. Emerging market stocks rose 0.80% as Latin American currencies fell due to the dollar strength.

Friday was to be the last day of the Bank of England’s bond buying program set up to stabilize government bond, or gilt markets, after investors were spooked by unfunded tax cuts announced in a “mini-budget” last month.

Investors appeared to have little confidence in the prime minister’s position or the likelihood that her decisions on Friday could restore Britain’s credibility in financial markets.

The euro was down 0.59% against the dollar at $0.9715 while the Japanese yen had weakened 1.00% versus the greenback at 148.71 per dollar. Japanese Finance Minister Shunichi Suzuki on Thursday reiterated the government’s readiness to take steps against excessive currency volatility.

In U.S. Treasuries, yields edged higher as investors continued to digest Thursday’s red-hot U.S. inflation print and face the likelihood that interest rates will stay higher for longer with the Fed’s policy rate potential moving closer to 5%. [US/]

Oil prices sank more than 3% in a choppy session as fears of a global recession and weak oil demand, especially in China, outweighed support from a large cut to the OPEC+ supply target. [O/R]

Google is now testing passkey support for Chrome and Android