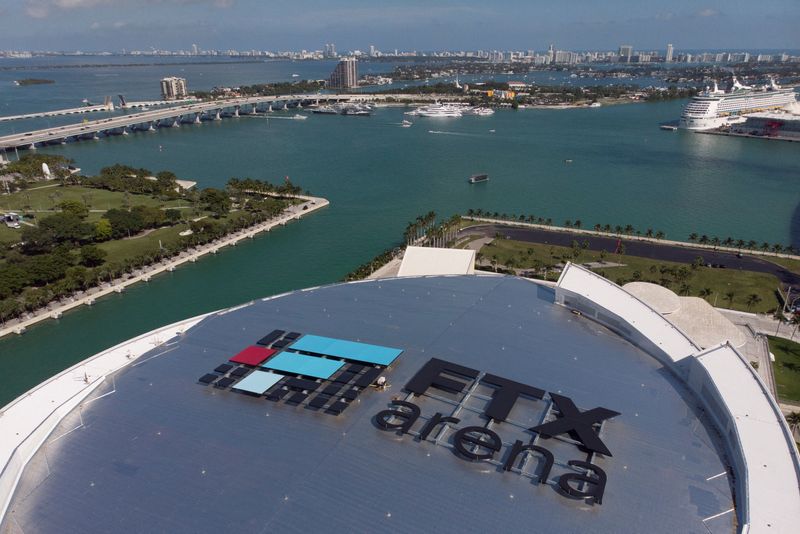 © Reuters. FILE PHOTO: The logo of FTX is seen in the rooftop of the FTX Arena in Miami, Florida, U.S., November 12, 2022. REUTERS/Marco Bello

(Reuters) – A lawsuit by FTX account holders in the United States is likely the first of many that will be brought over billions of dollars in losses on the cryptocurrency exchange, though the cases will face obstacles including proving that U.S. securities law applies to FTX’s products, experts said.

While some courts have ruled that certain cryptocurrencies fit the legal definition of securities, the issue remains unsettled.

Cases against FTX, which is based in the Bahamas, will be made more complex by the fact that U.S. securities laws generally apply only to domestic transactions, said Yuliya Guseva, a professor who heads the fintech and blockchain research program at Rutgers Law School.

“It is more complicated than your plain vanilla crypto exchange story,” she said.

Representatives for Bankman-Fried, O’Neal and Brady did not reply to requests for comment on the lawsuit.

FTX filed for bankruptcy on Nov. 11 and is facing scrutiny from U.S. authorities. Sources told Reuters that $10 billion in customer assets were shifted from FTX to Bankman-Fried’s trading company Alameda Research, and that more than $1 billion of customer funds is missing.

Tuesday’s lawsuit, a proposed class action brought on behalf of FTX yield-bearing account holders in the United States, claims the accounts were unregistered securities because they used investors’ pooled funds to engage in activities that generated the returns account holders received.

It is an open question whether U.S. securities laws apply to interest-bearing crypto accounts like those offered by FTX.

The U.S. Securities and Exchange Commission has recently alleged that other yield-bearing accounts constituted unregistered securities. Investors have made similar allegations in court against Voyager Digital Ltd and Celsius Network over their crypto accounts, but judges have yet to rule on those claims.

The lawsuit filed on Tuesday did not name FTX as a defendant but instead targeted individuals.

Other investors will likely bring more lawsuits as the details of FTX’s collapse come to light.

Guseva said, saying a “wave” of litigation is the “expected result of a large debacle like this.”

Cases against FTX and related companies will be paused during bankruptcy proceedings, but cases against individuals who have not filed for bankruptcy may be allowed to go forward, said Guseva.

Several law firms have said they are considering bringing claims on behalf of investors in the , or FTT, a cryptocurrency tied to the exchange whose value has plummeted from around $25 per token to less than $2 in the wake of the FTX liquidity crisis.

Tuesday’s complaint alleges that such promoters violated Florida consumer protection law by failing to disclose what they were paid to endorse the company.

Investors have brought similar claims against reality TV star Kim Kardashian over her promotion of EthereumMax tokens. A judge has not yet ruled on whether the case can go forward.

Kardashian has argued that the lawsuit should be dismissed because compensation details would not have mattered to investors in the token.

She settled similar claims earlier this year by the SEC for $1.26 million without admitting wrongdoing.

Sean Masson, an attorney at law firm Scott+Scott who represents investors in the case against Kardashian, said there may be potential market manipulation claims based on Bankman-Fried’s activities at Alameda.

Masson did not provide specifics. Market manipulation involves a trader or company attempting to secretly move or maintain the market price of a security or commodity.

“We think that what has come out so far is just scratching the surface on what truly happened,” he said.

Peloton Bikes bought on Amazon can now be self-assembled