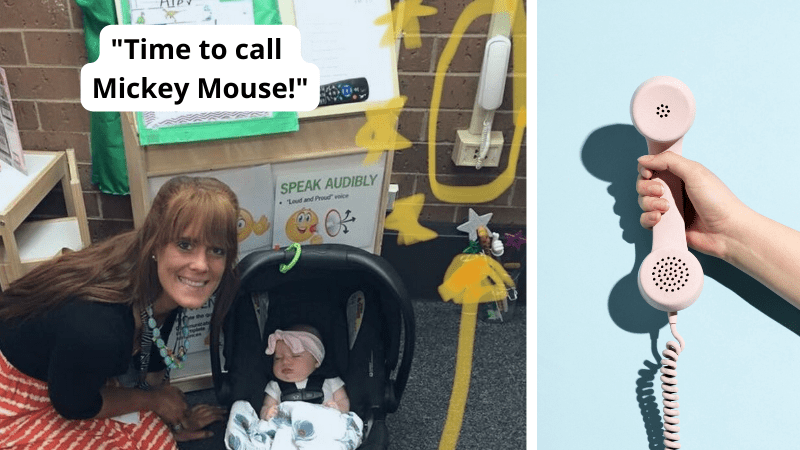 We’ve all heard about the importance of “catching them being good.” But preschool teacher Carly of Tried and True Teacher takes it to another level. Carly’s behavior management strategy is a spin on the positive phone call home. But instead of calling parents, she calls Mickey Mouse, Spider-Man, and Paw Patrol. That’s right—read on for more on this character phone call strategy for the pre-K–1 crowd.

How does the character phone call work?

First of all, you’ll need a phone—the old-fashioned kind with a cord. It’s not—and this is key—a working phone. This strategy is all about recognizing positive behavior. When you see a student working hard, being kind, or engaging in any other kind of positive behavior, you pick up the phone and pretend to make a phone call. Only you’re not pretend-calling their grown-ups at home, you’re calling their favorite character or celebrity to brag on them (because the only thing better than getting a compliment is overhearing someone say it to a person you really care about).

“Hello! Is this Minnie Mouse?”

“Hi Minnie! I just wanted to let you know that Hazel is doing math centers right now and she’s really on task. Yeah, she’s working so hard on her doubles facts. She’s going to have them down in no time!”

“Hazel, Minnie says you should be so proud of yourself!”

Who should I “call”?

Ghostbusters! Just kidding … unless those are the characters your students really like. Here are a few categories and ideas, but remember this works best when you find out who is special to each student:

Isn’t it kind of lying to them?

Let me stop you right there. Of course students need to know that you are trustworthy, and a big part of that is telling the truth. But there’s a big difference between play-acting and lying. You can and should be doing this in a way that students know you are pretending. In her blog post, Carly shares that her students think this is hilarious. They’re laughing because they know it’s make believe.

What else do I need to know?

If you’re looking for a phone, you might have luck at a thrift store or even in the cabinets of your staff workroom (you seriously never know what you might find in there). If you have a working landline phone in your room, you can use it. It’s just nice to have one that’s not connected. Carly recommends walking around while you’re talking for added effect.

Help! I Trash-Talked My Partner in a Text and Accidentally Sent It to Her

Adobe Creative Activities You Can Rinse and Repeat

Holidays Around the World for Kids and Students