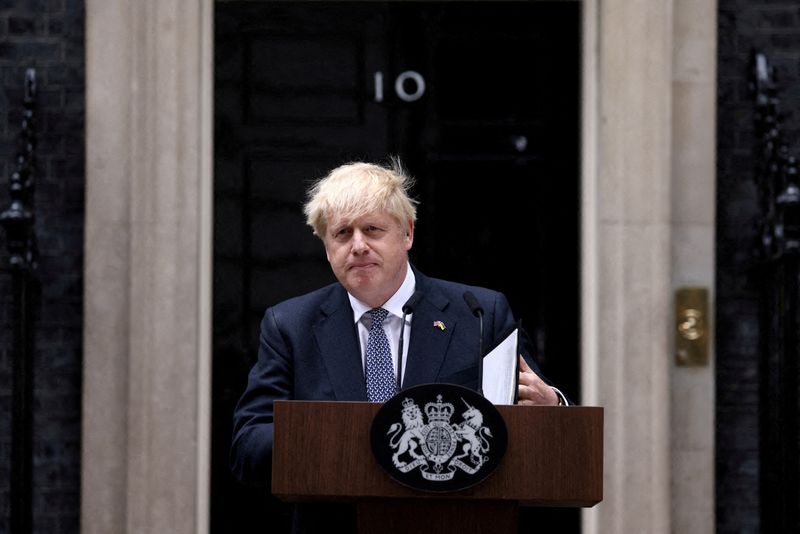 LONDON (Reuters) – Boris Johnson is fighting to get enough support to make a shock return as Britain’s prime minister after prominent figures on the right wing of the Conservative Party coalesced around the man once accused of betraying him, Rishi Sunak.

* Johnson and his former finance minister Sunak are leading the contenders to be the next prime minister following Liz Truss’ resignation after just six weeks in office.

* Truss was brought down by an economic programme that roiled financial markets, pushed up living costs for voters and enraged much of her own party.

* Candidates are canvassing support among Conservative Party lawmakers to become party leader – and prime minister – in a fast-tracked contest.

* Johnson, who was ousted by his lawmakers in July but remains popular with party members, is aiming to make what would be an extraordinary political comeback.

* The leadership election will be completed by Friday to replace Truss, the shortest serving prime minister in British history. The first results will be announced at 1700 GMT on Monday.

* A nationwide election need not be called for another two years, but opposition parties said voters should now be given a say. Labour Party leader Keir Starmer said the battle at the top of Conservatives was a “ridiculous, chaotic circus”.

* Labour leads the government by more than 30 points in some opinion polls.

* Hunt reiterated on Friday that the government will do “whatever is necessary” to drive down debt in the medium term.

* Sterling fell on Friday, weighed by the economic and political uncertainty. Analysts reckon that markets will need some time to thoroughly shake off the political risk premium built over recent weeks.

WHAT’S BEHIND THE CRISIS?

* The Bank of England was forced into emergency bond-buying to stem a sharp sell-off in Britain’s $2.3 trillion government bond market that threatened to wreak havoc in the pension industry and increase recession risks.

* Kwarteng’s replacement Jeremy Hunt on Monday scrapped “nearly all” of the economic plan and scaled back Truss’s vast energy support scheme, announced in September, in a historic U-turn to try restore investor confidence.

Facebook warns it could block news in Canada over proposed legislation

While Overall NFT Transactions and Buyers Are Down, NFT Sales Jumped 2% Higher Than Last Week – Markets and Prices Bitcoin News