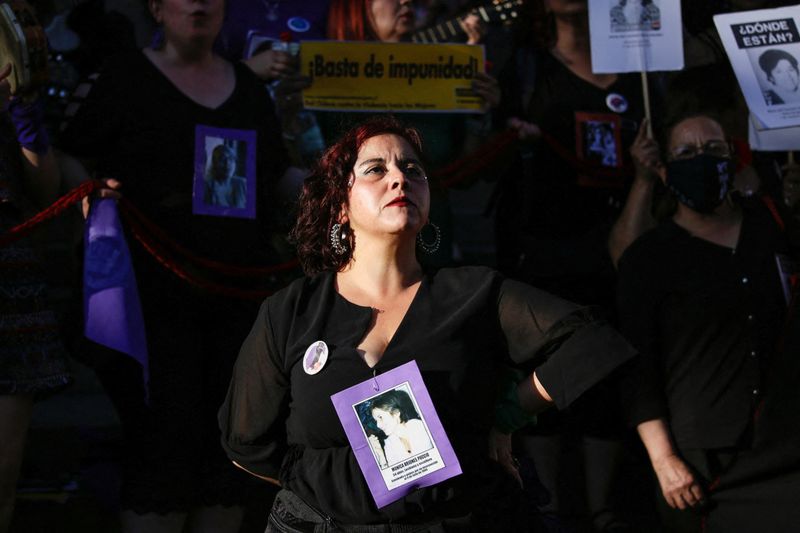 © Reuters. FILE PHOTO: A person takes part in a protest to mark the International Day for the Elimination of Violence against Women, in Santiago, Chile, November 25, 2022. REUTERS/Sofia Yanjari/File Photo

MEXICO CITY (Reuters) – From Buenos Aires to Bogota, women across Latin America took to the streets on Friday in marches to mark the International Day for the Elimination of Violence against Women, demanding more action from authorities.

In Mexico City, feminist associations marched down Reforma Avenue, one of the capital’s main arteries, chanting with loudspeakers and smoke flares, flanked by hundreds of police with riot shields and protective vests.

Mayor Claudia Sheinbaum, who is hoping to become the country’s first female president in 2024, had earlier this week called for a peaceful protest, but some wary activists arrived with helmets and goggles in case of tear gas.

Victims of rape and mothers of women and girls killed across Mexico took to loudspeakers to demand an end to gender violence and better criminal investigations for their loved ones.

According to government data, some 20 women are killed each day though few cases result in sentences.

“We will not be silenced,” said Lorena Gutierrez, whose 12-year old daughter was a victim of femicide. “Women and girls are still disappearing all across the country.”

Honduras suffers the region’s highest rate of femicides, followed by the Dominican Republic, El Salvador, Bolivia and Brazil, according to a new U.N. report.

“Our obligation is to redouble efforts so that the women and girls of our region can truly exercise their right to live a life free of violence and discrimination,” Jose Manuel Salazar-Xirinachs of the U.N.’s regional economic body said.

In October, 80 women in Mexico were killed due to their gender, according to a Tuesday government report; the fourth consecutive monthly increase. The government has drawn ire for trying to downplay the dire situation.

“We want them to listen,” said Jose Angel Trejo, whose daughter Melani was killed in August in Morelos, a state known for high rates of gender violence. He said investigators weren’t answering his messages and the suspect is still free.

Trejo hopes his daughter’s case will be transferred to federal authorities.

“Many cases of femicide we work with are being very badly investigated,” added Gabriela Castillo from the Federal Institute of Public Defense (IFDP), which helps victims and their families through legal processes, saying she wanted more awareness of the mistakes being made.

“We want this violence to be visible to everyone,” she said.