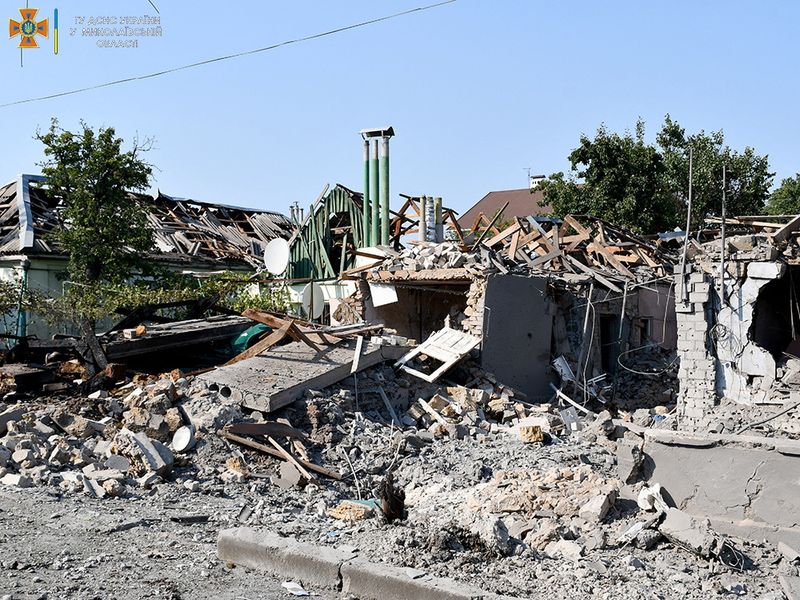 © Reuters. View of damage after the shelling of a private residential complex, in Mykolaiv, Ukraine, August 29, 2022 in this picture obtained from social media. SES Ukraine/via REUTERS

By Andrea Shalal and Pavel Polityuk

MYKOLAIV, Ukraine/KYIV (Reuters) – Ukrainian President Volodymyr Zelenskiy urged Russian soldiers to flee for their lives after his forces launched an offensive to retake southern Ukraine, but Moscow said it had repulsed the attack and inflicted heavy losses on Kyiv’s troops.

Ukraine said on Monday its ground forces had gone on the offensive for the first time after a long period of aerial strikes on Russian supply lines, especially ammunition dumps and bridges across the strategically-important River Dnipro.

“If they want to survive, it’s time for the Russian military to run away. Go home,” Zelenskiy said in a late night address.

“Ukraine is taking back its own (land),” he said, adding that he would not disclose Kyiv’s battle plans.

In response, Kremlin spokesman Dmitry Peskov said on Tuesday that Russia was methodically pressing on with its plans in Ukraine, adding: “All of our goals will be reached.”

The Ukrainian counter-attack comes after several weeks of relative stalemate in a war that has killed thousands, displaced millions, destroyed cities and fuelled a global energy and food crisis amid unprecedented Western economic sanctions on Russia.

Russia captured large tracts of southern Ukraine near the Black Sea coast in the early weeks of the six-month-old war, including in the Kherson region, which lies north of the Russian-annexed Crimean Peninsula.

Ukraine, now armed with sophisticated Western-supplied weapons, sees recapturing the region as crucial to prevent Russian attempts to seize more territory further west that could eventually cut off its access to the Black Sea.

Oleksiy Arestovych, a senior Ukrainian presidential adviser, said Russian defences in the Kherson theatre had been “broken through in a few hours”. It was unclear which line of Russian defence, of which there are many, he was referring to.

Arestovych also said Ukrainian forces were shelling ferries Russia was using to supply its forces on the west bank of the Dnipro.

Natalia Humeniuk, a Ukrainian military spokeswoman, on Tuesday said Kyiv could destroy any pontoon bridge across the river that Russia tried to build or ferry crossing it.

“The whole area where such a crossing can be built is under our fire control and (any new structure) will be hit.”

Britain, an ally of Ukraine, said on Tuesday that Kyiv had stepped up its artillery barrage across the entire southern front, but that it was not yet possible to confirm the extent of Ukrainian territorial advances.

Vitaliy Kim, governor of the Mykolaiv region close to front lines north of Kherson, told Ukrainian TV: “Heavy fighting is going on. Our military is working around the clock. Liberation of the Kherson region is coming soon.”

Unverified reports, images and footage on social media suggested Ukrainian forces may have taken back some villages and destroyed some Russian targets in the south.

Russia’s RIA news agency reported that the Russian-controlled town of Nova Kakhovka had been left without water or power after a Ukrainian missile strike.

However, Russia’s defence ministry said the Ukrainian offensive had been thwarted.

It said Ukrainian forces, after trying to go on the offensive in three different directions in the Mykolaiv and Kherson regions, had lost over 1,200 military personnel as well as 139 tanks, armoured vehicles and trucks.

Russia’s defensive actions have resulted in a rout of Ukrainian forces, it added, saying air defence units had shot down dozens of missiles near Kherson.

Reuters could not verify the battlefield reports.

A Russian-installed official in Kherson, Kirill Stremousov, was quoted by the TASS news agency as saying a group of armed people had tried to put up resistance to police in one area of Kherson after hearing about Ukraine’s offensive.

One of the people was killed in a shootout, TASS added.

Russia invaded Ukraine on Feb. 24 to wage what it said was a “special military operation” to ensure its own security against an expanding NATO and to protect Russian-speaking communities.

Ukraine, which declared independence from the Russian-dominated Soviet Union in 1991, and its allies describe the conflict as an unprovoked war of conquest.

The Zaporizhzhia nuclear power plant in central southern Ukraine, captured by Russian troops in March but still manned by Ukrainian staff, has been a hotspot in the conflict, with both sides trading blame for shelling in the vicinity.

Russia’s defence ministry accused Ukrainian troops of firing two shells that detonated near a spent fuel storage building at the plant in the last 24 hours. There was no immediate comment from the Ukrainian side.

A mission from the International Atomic Energy Agency (IAEA) is expected this week to visit the nuclear plant, Europe’s largest, to inspect and assess any damage. IAEA chief Rafael Grossi met Zelenskiy in Kyiv on Tuesday, the president’s office said, without elaborating.

Inspection of the plant should take one day, the head of the Russian-installed local administration told Interfax on Tuesday. Yevgeny Balitsky, who on Monday said he did not expect much from the IAEA visit, told the agency the inspectors “must see the work of the station in one day.”

Ukraine on Tuesday accused Russia of deliberately shelling a corridor that IAEA officials would need to use to reach the plant in an effort to get them to travel via Russian-annexed Crimea instead. There was no immediate response from Moscow.

Snap plans to lay off 20 percent of employees

Saudi Arabia stocks higher at close of trade; Tadawul All Share up 2.62% By Investing.com